Boris Johnson warned Mike Pence that he would not allow the health service to be carved up in trade talks with America. 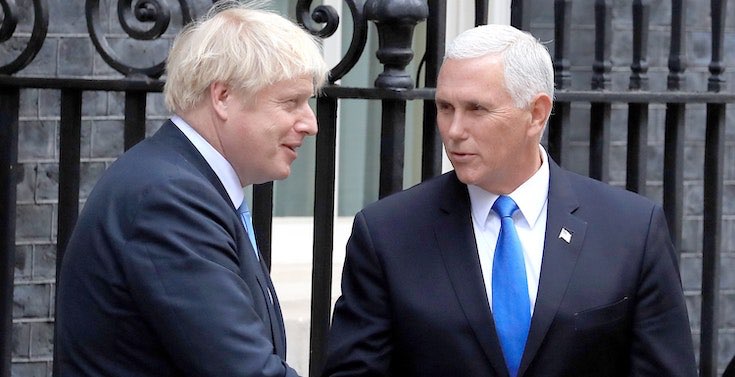 NHS not on the table

US vice president Mike Pence and his wife Karen have left the UK to return to Washington.

While he was in the UK, Prime Minister Boris Johnson warned that the NHS is “not on the table” during any post-Brexit trade deal with the US.

Mr Johnson played it tough with Mr Pence as he welcomed Donald Trump’s right-hand man to Downing Street for talks.

The PM said he would not allow the health service to be carved up in trade talks with America and added that Britain was “not too keen on that chlorinated chicken”.

In a dig at Labour leader Jeremy Corbyn and his decision to block a general election, Mr Johnson added: “We have a gigantic chlorinated chicken of our own on the opposition benches.”

He made the comments at Number 10 before being told to “shut up” by aides, with journalists whisked away to allow the pair to continue their bilateral talks.

Ready for a trade deal

Mr Pence said he had spoken to Mr Trump – who he called a “friend” of the PM’s – on Thursday morning and that the US president had emphasised he was “ready, willing and able” to strike a free trade deal “immediately” after the UK had left the European Union.

But Mr Johnson took a strong approach with the US in a bid to allay fears that creeping privatisation and a slackening of food safety standards could form part of any agreement.

“Of course, we will do everything to increase free trade but the National Health Service is not on the table as far as our negotiations go,” he said.

“And we’re not too keen on that chlorinated chicken either.”

The Tory leader, who is facing open revolt in Parliament and within his own party after failing to rule out a no-deal Brexit, said he wanted greater access for UK businesses to sell their goods into America.

Speaking in the White Room at Number 10, he said: “We will drive that free trade agreement and of course the US economy is a wonderful, massive opportunity for the UK.

“But it is still the case, did you know, that the people of the United States of America do not eat any British lamb or beef or haggis from Scotland

“I think there are still barriers to trade in shower trays, would you believe it, from the UK and many other products where we think we could free up the US market.

“I know that you guys are pretty tough negotiators so we are going to work very hard to ensure that any free trade deal is one that works for all sides.” 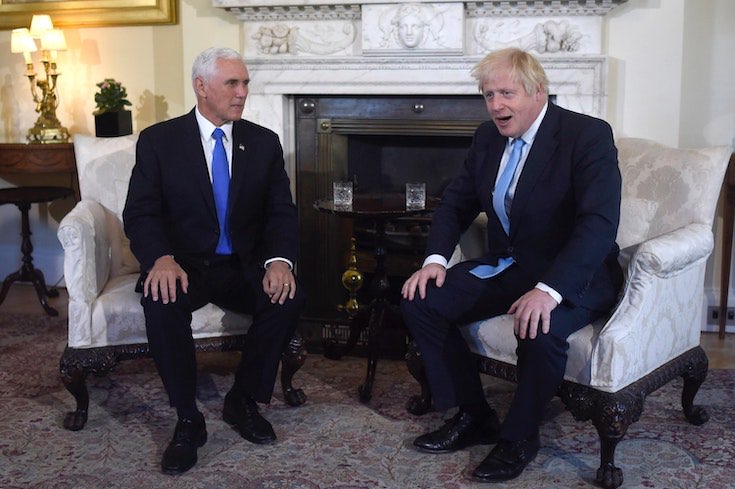 Mr Pence said: “The president often says the US has the biggest economy in the world and we truly believe that a free trade agreement between the United States and the UK could increase trade between our country by three or four times.

“We are anxious to do that and to stand with you and do everything in our power to strengthen what has been a historic and special relationship between the United States of America and the United Kingdom.

“It is embodied in the very warm and personal relationship that you have forged with President Trump, with myself and our administration.”

He thanked the PM for fitting him in at a “busy time” for the UK, to which Mr Johnson replied: “It is always busy.”

Mr Pence later told guests at the Lord Mayor’s International Trade Dinner in central London that those who think the UK is turning “inward” with Brexit were wrong and that the US stood “shoulder to shoulder” with the UK.

Speaking at the Guildhall’s Great Hall he said that the US stood ready to cut a trade deal “immediately” after Brexit, but joked there might be tough discussions about chlorinated chicken.

Mr Pence added: “The minute the UK is out, America is in.”

A Downing Street spokesman said the pair used the talks to “reiterate their commitment to negotiating an ambitious free trade deal after the UK leaves the EU”. The PM “reaffirmed the UK’s commitment to the Good Friday Agreement” while with Mr Pence, said Number 10.