NHS England urged people to stay at home if they get the bug – which causes vomiting and diarrhoea – to avoid passing it on. 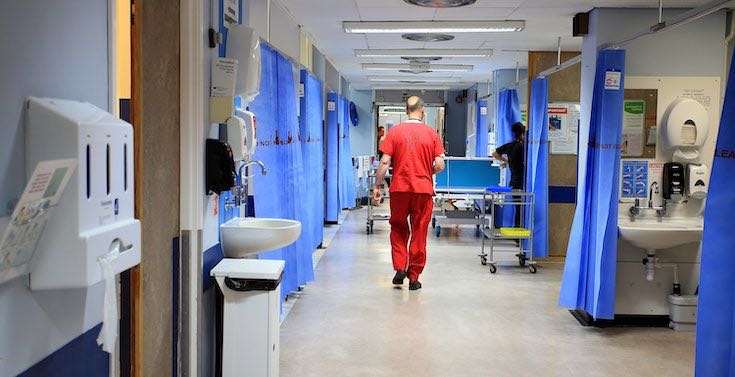 A surge in norovirus has led to the closure of more than 1,100 hospital beds in England in the last week.

Figures show a rise in cases of the vomiting and diarrhoea bug, with almost double the number of hospital beds closed every day over the last week than at the same time last year.

Data from Public Health England (PHE) also showed that confirmed norovirus cases for November 11 to 24 were 28% higher than the average for the same period in the previous five years.

NHS England has urged people to stay at home if they get the bug to avoid passing it on to other people.

It advises adults and children not to go back to work or school until at least 48 hours after symptoms pass.

Professor Stephen Powis, medical director of the NHS, said: “We’ve already seen a number of hospitals and schools affected by norovirus, and unfortunately instances like these are likely to rise over the coming weeks.

“It’s a really unpleasant illness to catch, but for the vast majority of people it will usually pass in a couple of days, and self-treating at home is the best way to help yourself and avoid putting others at risk.

“Crucially, if you’re experiencing norovirus symptoms it’s important that you don’t return to work or school for 48 hours after they clear – and avoid visiting elderly or ill friends and relatives – to avoid spreading it to other people.”

Dr Nick Scriven, immediate past president of the Society for Acute Medicine, said: “This is a great concern on top of a system already pushed to its limits.

“It is worrying for many reasons, one of which is that it is not a minor illness and can be fatal for some.

“For the system, it closes beds and also slows discharges, as you cannot discharge a patient from an affected ward to a care home.

“All in all, the rise in norovirus and flu is going to be a severe challenge for a system already stressed to the max.”

Nick Phin, national infection service deputy director at PHE, said: “Cases of norovirus are at higher levels than we would expect to see at this time of year, although this is not unprecedented.

“Practising good hygiene is one of the best ways to protect against norovirus.

“This includes thorough hand washing with soap and warm water after using the toilet and before eating or preparing food.

“We advise people not to visit GP surgeries and hospitals with symptoms.

“However, if they are concerned they should contact NHS 111 or talk to their GP by phone.”

Norovirus is often called the winter vomiting bug because it is most common in winter.

It is highly contagious and people who have been infected can pass it on for some time.

Some schools across England have closed in recent weeks due to outbreaks of the bug.