Opposition politicians hit out at the Scottish Government as new data on waiting times performance was released. 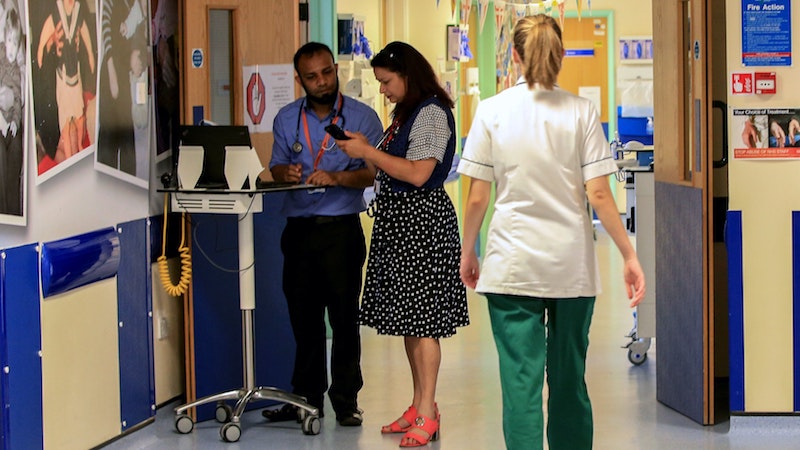 NHS waiting times performance in Scotland has hit a new low, with almost a third of patients waiting longer than the legally-binding target time for treatment.

As the figures were released, the Scottish Government was told that medical staff need “more support if they are going to have a realistic chance of matching treatment times targets”.

Professor Derek Bell of the Royal College of Physicians of Edinburgh spoke out as performance against key NHS waiting times targets worsened.

23,311 - the number of patients waiting longer than the legally binding treatment time guarantee of 12 weeks for inpatient or day case treatment in the first three months of 2019

But Conservative health spokesman Miles Briggs said there had been a “staggering increase in patients waiting longer than the SNP’s own supposedly legally-binding target”.

Opposition politicians hit out after official figures showed the Scottish Government’s Treatment Time Guarantee – which promises inpatient or day case treatment within 12 weeks – was met for just over two thirds (68.4%) of patients in the first three months of the year. 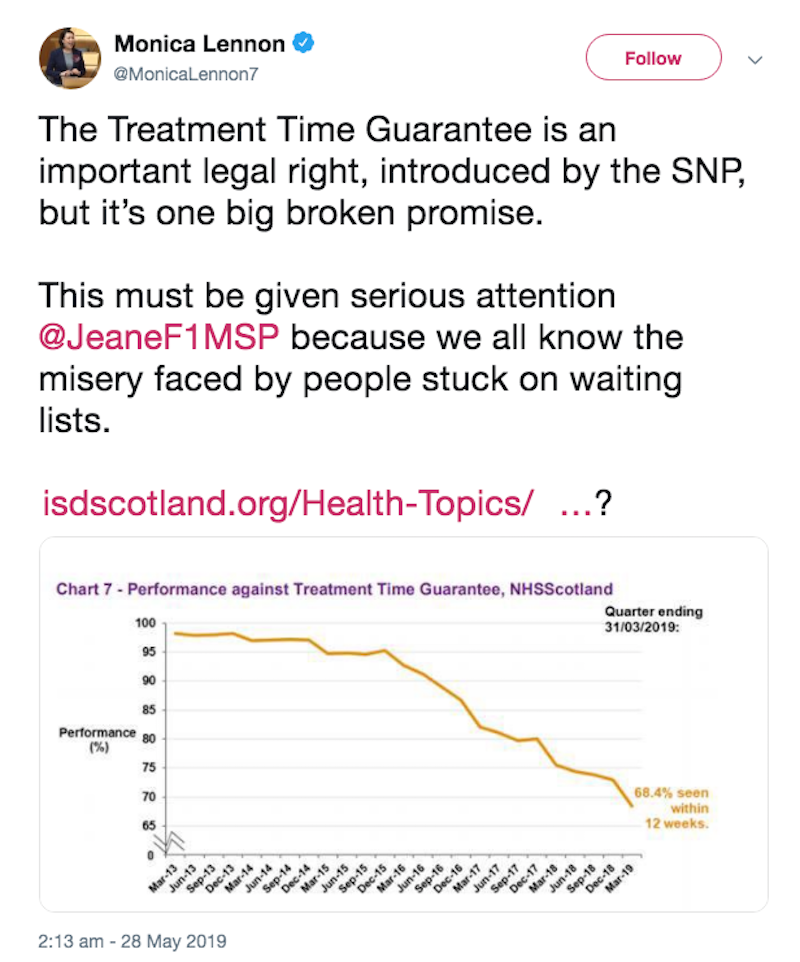 Monica Lennon (@MonicaLennon7) on Twitter regarding the treatment time of patients.

And in NHS Grampian, fewer than half (47.3%) of patients received treatment within 12 weeks.

While 50,348 patients across Scotland received treatment within the target time from January to March 2019, there were 23,229 patients who waited more than 12 weeks.

Overall performance was down from the 72.9% recorded in three months of 2018, falling to the lowest level since the legally binding guarantee was introduced in October 2012.

NHS performance against another key waiting time standard, which sets out that patients should start treatment within 18 weeks of being referred, also dropped to its worst ever.

The referral to treatment standard, introduced in December 2011, sets out that 90% of patients should start receiving care within 18 weeks – but in March 2019 77.3% were seen within this time. 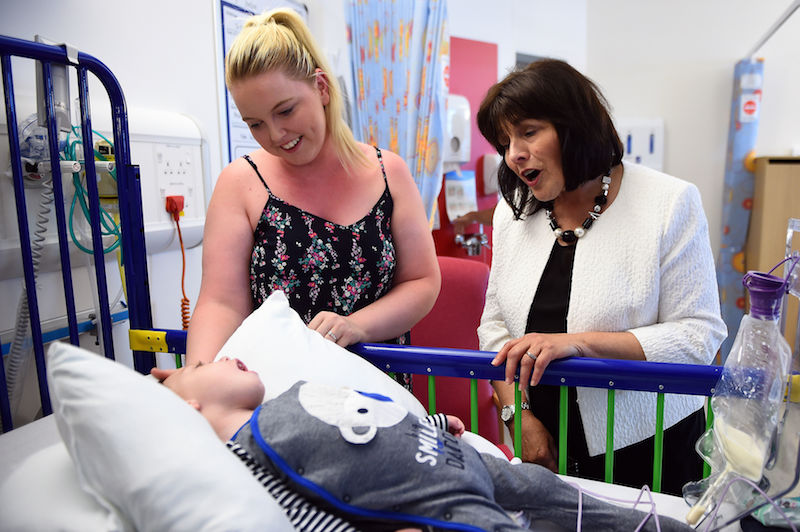 And in NHS Grampian only 61.7% of patients started treatment within the target time in March, the NHS statistics showed.

Professor Bell said the Scottish Government needed to come up with an NHS workforce plan “that gives medical staff the time to innovate as well as treat, teach, and research”.

Increasing the number of places in medical school will also help address the problem in the long term, he added.

“Doctors across the Scottish NHS are working hard to deliver the quality treatment standard for patients,” he said. “However, medical staff require more support if they are going to have a realistic chance of matching treatment times targets.”

Other figures showed an improvement in waiting times for key diagnostic tests – although the standard of having patients wait no more than six weeks for these is still not being met.

Gordon Matheson, Cancer Research UK’s public affairs manager in Scotland, said that “too many people are still waiting too long for tests”. 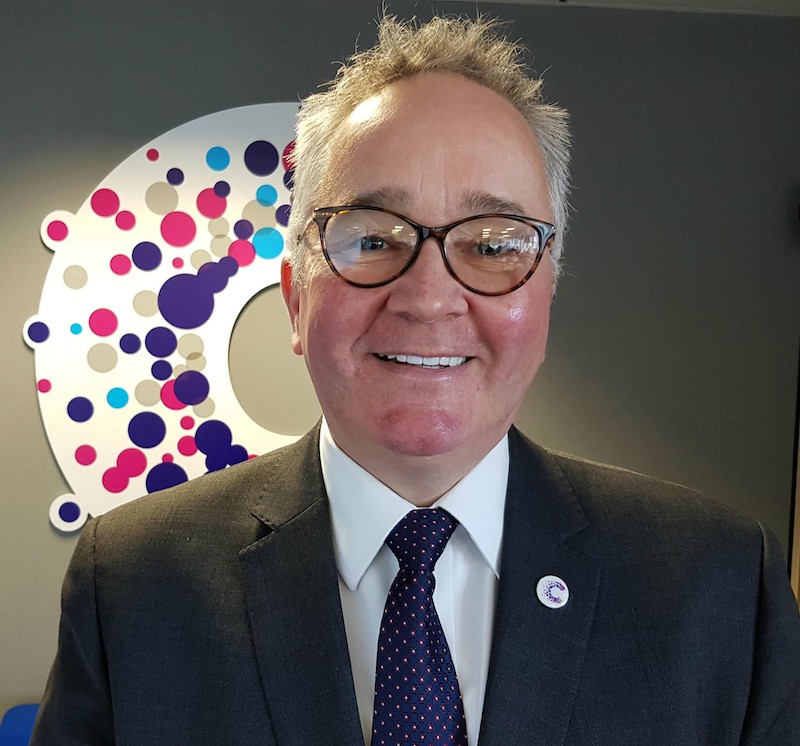 He added: “Part of the problem is staff shortages in the NHS, which is an on-going and deeply concerning problem.”

Ms Freeman said she had been “very clear that our central aim is to significantly improve the experience of patients waiting to be seen or treated”.

And she added the initial investment of £27 million had “supported health boards to drive down long waits in a number of areas”.

Ms Freeman added: “In April, I outlined the second phase of the P=plan which will direct £70 million of investment to deliver a range of activity, including additional cataract procedures and knee and hip replacements, as well as increase the number of outpatient appointments and diagnostic procedures.

“In addition, health boards will use the investment to focus on ensuring future sustainability across the health service and to increase capacity, including additional workforce, at the network of elective and diagnostic centres currently being created.”

But Mr Briggs said: “It is truly appalling that so many patients are waiting, often in pain, for such a long time to be treated. “Guarantees given to patients by the SNP aren’t worth the paper they are written on.”

Labour health spokesman Monica Lennon was also critical of the Scottish Government, saying: “Thousands of patients are having to wait far too long for treatment. These waits are leaving patients in pain and causing stress for them and their families.

“The Health Secretary promised to deliver results for patients with her improvement plan in October.

“The only results she has delivered so far is a worsening of performances and more patients left in pain.

“It’s clear our NHS is simply not getting the resources it needs under the SNP to give patients the care they deserve.”