Major ambulance trusts are increasingly relying on private ambulances to attend 999 calls, an investigation has found. 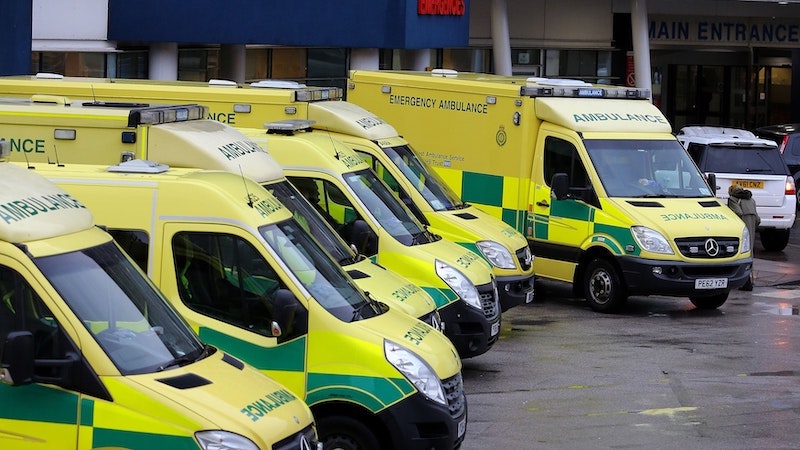 Some trusts told PA they rely on private ambulances due to a chronic shortage of NHS staff and ongoing problems with recruitment.

In some parts of the South, almost one in five emergency calls result in a private ambulance being sent to the scene.

Earlier this year, the Care Quality Commission (CQC) published a damning report warning that patients were being put at risk by private ambulances (read our survey which reveals patient health is at risk from staff shortages).

It found that some firms were failing to obtain references or carry out criminal records checks while a lack of staff training was leading to serious patient harm.

For the latest study, PA obtained data from the 10 ambulance trusts in England via the Freedom of Information Act.

Cost doubled in a year

It detailed how much they spent on private ambulances and taxis, and whether these were used for 999 calls or non-emergency patient transfers. 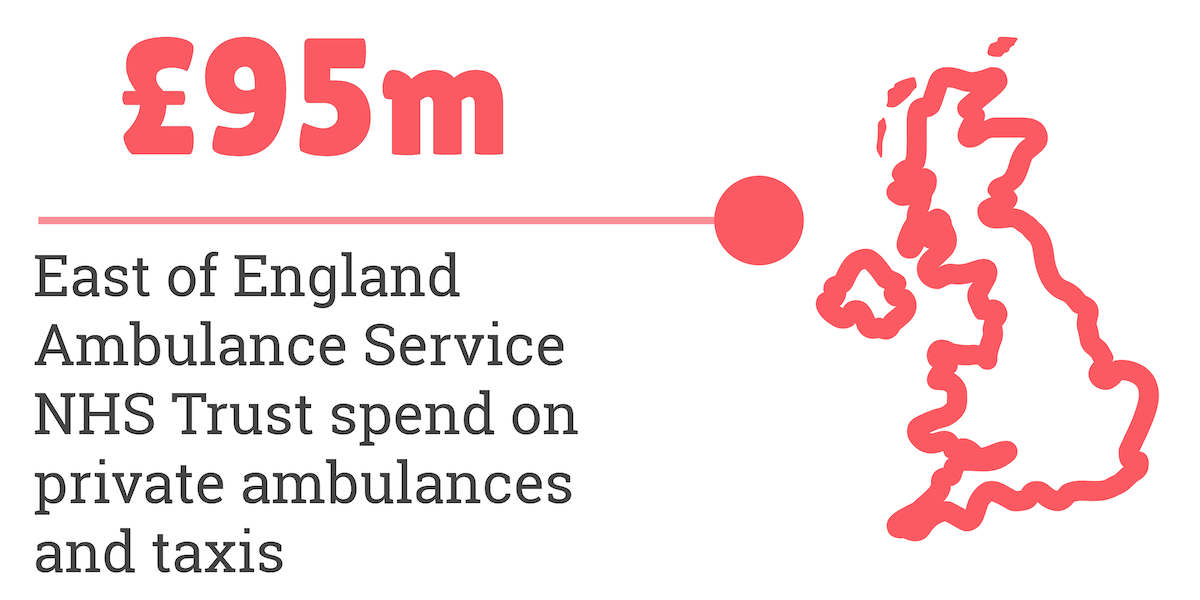 Private ambulances were sent to 5.21% of all 999 incidents in 2018/19, up from 2.59% the year before. The East of England Ambulance Service NHS Trust said it had hired hundreds of new staff but used private ambulances for overtime and spikes in demand, such as in winter.

It added: “It takes three years to qualify as a paramedic and we use private services to fill gaps in budgeted capacity whilst student paramedics complete their university studies and whilst we fill vacancies.

“Recruiting trained staff, particularly registered paramedics, is extremely challenging and whilst we continue to recruit and train a significant number of patient-facing staff, we continue to use private ambulance services so that we can respond to patients as quickly as possible and give them the best possible service.”

South Central said: “Private providers ensure that despite vacancies in our frontline workforce (due to national shortage of paramedics and exacerbated in our region by operating in a high-cost living area and the need to maintain salary levels that are agreed at a national level) we can ensure that the expected level of demand for our 999 service can be met.”

But this rose in 2018/19 to 7.2% (48,686 incidents). A statement from East Midlands said private ambulances helped it “bridge the vacancy gap while we recruit and train people to work on our frontline.

“Ambulance crews are highly-skilled clinicians and it is not possible to recruit and train staff within a short period of time.

“However, since May 2018, EMAS has recruited over 200 additional frontline colleagues, with the majority completing their training and starting to join our ambulance crews out on the road.”

West Midlands Ambulance Service, which recently lost its contract to supply non-emergency patient transport after the bid went to a private firm, spent nothing on private ambulances in 2018/19. 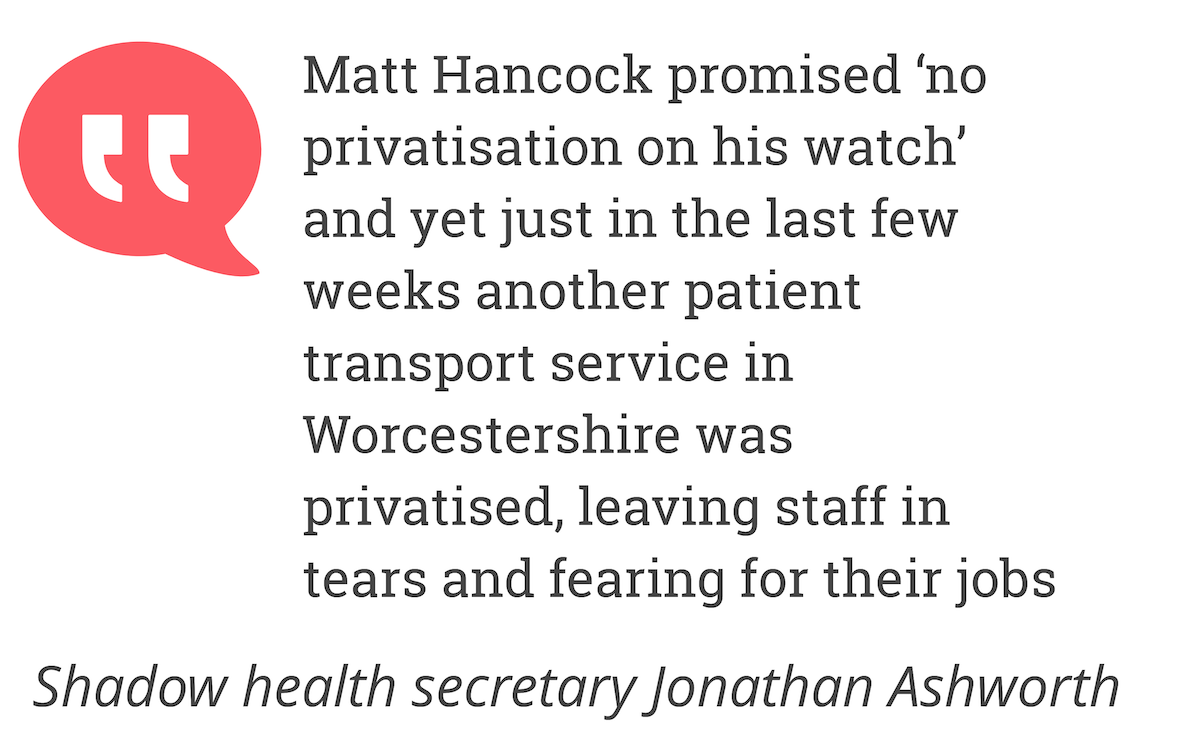 “Matt Hancock promised ‘no privatisation on his watch’ and yet just in the last few weeks another patient transport service in Worcestershire was privatised, leaving staff in tears and fearing for their jobs.

“Patients are utterly fed up of profiteering companies like this taking our NHS for a ride.

“Research suggests private firms are cutting corners and failing to provide the level of care needed for patients. “The NHS sorely needs investment to address staff shortages and stem the flow of departures from the ambulance service, rather than papering over the cracks.”

Cost is almost £2m up on previous year

While some individual ambulance services increased their spend on private ambulances and taxis, others spent less than the year before.

The CQC report in March warned that patients were being put at risk from private ambulances.

The regulator found “ongoing issues with poor recruitment, training and safeguarding processes, with evidence of incidents of serious harm to people from staff that had not been properly recruited and vetted.”

It added: “Many providers had no, or very limited, training for their staff.” In one example, inspectors heard how a driver believed he could drive the wrong way down a one-way street if he had a blue light on. In another, “an extremely confused dialysis patient was found wandering in the street” after crews failed to make sure he got into his home safely.

A statement from the Independent Ambulance Association (IAA) said: “The support provided by independent ambulance providers to NHS ambulance trusts is vital in ensuring that the emergency needs of patients are met, particularly where there are peaks in demand.”

It said private providers must be registered with the CQC and are “subject to additional and rigorous checks by NHS trusts.

“Our view is that monies spent on independent ambulance providers by NHS ambulance trusts are an investment to ensure the highest standard of care is provided; it’s also very cost-effective.”

The IAA said it was consulting on a quality framework for its members “that will provide greater assurance for those commissioning services in areas not currently covered by the CQC”.

A Department of Health and Social Care spokesman said: “We are committed to a world-class NHS free at the point of use and the proportion of spend on the independent sector in the last financial year is at the same level as 2014/15.

“With record numbers of paramedics in the ambulance service, we are supporting them to deliver the response patients need in an emergency, including investing more than £36 million for trusts to buy 256 new vehicles and introducing improved performance standards.”