The new test is far more accurate than the current check and could help hundreds of thousands of people. 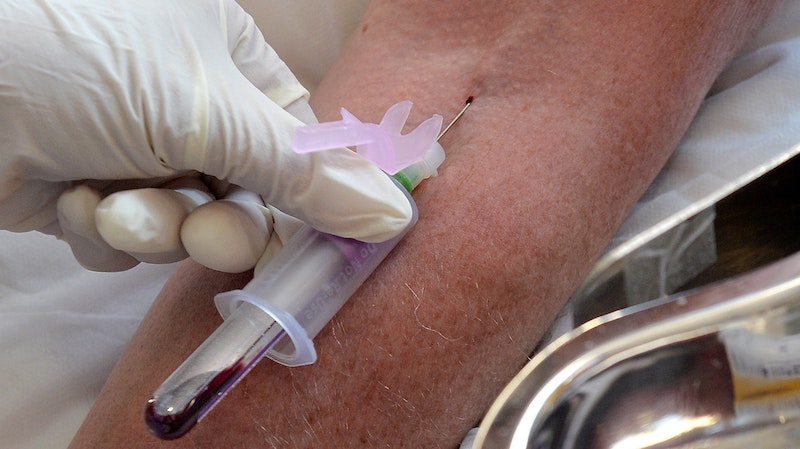 A rapid blood test which detects heart failure at an early stage has been developed by scientists.

The new test, which is being earmarked for future use on the NHS, is far more accurate than the current check and could help hundreds of thousands of people.

At the moment, doctors measure levels of a protein called B-type natriuretic peptide (BNP) in the blood through a standard blood test. Increased levels of this protein indicate a risk of heart failure, but obesity, advancing age and some medications also push up levels of BNP, meaning the test is not totally reliable.

Now experts at Queen’s University Belfast have now got round this problem by measuring BNP together with other key proteins in the blood.

Their study identified 25 proteins found in the blood of heart failure patients.

Further tests on 400 blood samples, taken from patients both with and without heart failure, revealed that the 25 proteins plus BNP levels provided a significantly more accurate diagnosis of heart failure, which affects about 920,000 people in the UK.

The test also picks up signs of heart failure before patients present with serious clinical symptoms, thereby preventing long-term damage to their heart.

Experts are now collecting samples from patients across the UK, Ireland, France, Greece and the US to confirm their findings. Dr Claire Tonry, research fellow at Queen’s, said: “There’s an urgent need to develop tests that can diagnose heart failure at an earlier stage and with greater accuracy in order to improve outcomes for patients with the disease.

“It’s difficult to measure multiple biomarkers in blood in a single test but, through our method, we were able to quickly measure multiple proteins from a small amount of blood that’s routinely collected by clinicians for measurement of BNP.

“The results from the test are promising and we’re now carrying out further research to see if this will be a clinically useful tool for diagnosis of heart failure.”

"It is vital that heart failure is diagnosed as soon as possible, given there are treatments to delay its progression and to treat symptoms" - Dr Sonya Babu-Narayan, British Heart Foundation

Dr Sonya Babu-Narayan, associate medical director at the British Heart Foundation, said: “Heart failure still kills thousands of people every year in the UK and its symptoms may be cruel and debilitating.

“We are seeing a significant increase in people going to hospital with heart failure, as the population ages and more people develop the disease after surviving a heart attack.

“It is vital that heart failure is diagnosed as soon as possible, given there are treatments to delay its progression and to treat symptoms.

“It is early days but if new blood tests like this yield earlier and more accurate heart failure diagnosis, people living with heart failure could receive treatment sooner.

“This will help them to better manage their symptoms so they can live full and active lives for longer.”

The findings were published at the British Cardiovascular Society Conference in Manchester.

A second study presented at the conference found a postcode lottery of care in the UK for heart failure patients.

The survey, led by Helena Masters, a heart failure nurse manager at pharmaceutical firm Novartis, also found that around one in seven local services did not have a consultant or a lead physician specialising in heart failure.