Scientists are on a quest to stop cancer from occurring in the first place by “birthing” a tumour in lab-grown human tissue. 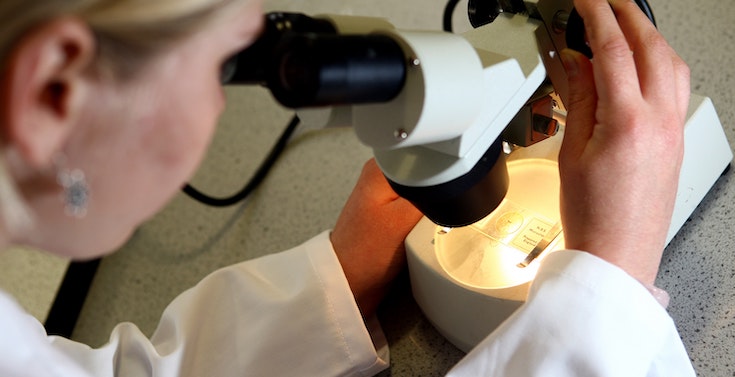 Scientist seek to birth cancer to better understand its origins

A new cross-Atlantic research alliance hopes to shift cancer treatment from the “expensive firefighting of late-stage disease” to “rapid, cost-effective” intervention at the earliest point.

By creating a “living laboratory” of human tissue, they hope to “birth” a cancer which would help them better understand its origins, and ultimately prevent it from developing.

Scientists are already investigating how to take cells out of someone at high risk of developing cancer and reproduce them using a 3D printer to test under what conditions they are most likely to turn cancerous.

They also hope to develop screening tests that will detect multiple cancers, and use the power of imaging technology to identify which cells are most likely to become dangerous – and therefore avoid over-diagnosing patients.

Dr David Crosby, head of early detection research at Cancer Research UK, said: “One of the fundamental problems in early detection science which this is pointing towards is in a human being we never get to see a cancer being born.

“By the time you find a person who has cancer, that cancer is already kind of established, and cancer is a disease that evolves over its lifetime – it starts off as one thing but it changes and fragments and breaks and mutates over time.

“So by the time you are looking at a cancer in a person you say ‘Well how can I detect that, let me measure its molecules’, the molecules it has now are not necessarily the ones it had at the start, so this kind of technology, if you can essentially give birth to a cancer in a piece of synthetic human tissue in the lab, you can see what it’s like on day one and hopefully be able to detect and intercept it.”

Survival rates increase three-fold for six different types of cancer if caught early at stage one, when the cancer is usually small and localised.

While there are screening programmes for bowel, breast and cervical cancer, uptake is low, and there is a “major unmet need” for the screening of other cancers.

The alliance will explore how best to harness Artificial Intelligence to sift through big data and spot signs that are undetectable to humans.

Some techniques the scientists are exploring are at the early experimental stages, such as photo acoustics where a laser light is directed into the tissue or tumour and sound is returned.

Hyper-polarised MRI scans are also being developed as a non-invasive way to see how cancer cells generate their metabolic energy.

This might indicate when “indolent” cancer cells are most likely to become active, and therefore a cause for concern.

The team believe imaging technology could help them take “enormous strides in our ability to discriminate” between what needs treating and what will not have a significant health impact.

But other screening techniques could be as simple and cheap as taking a saliva swab, breath sample, urine or blood test, which they hope could encourage more people to be tested.

They aim to target populations most at risk and reduce anxiety by changing the narrative around cancer from it being a death sentence to a condition that can be managed.

Dr Crosby added: “If you think 30 years down the line if I can scan your genome and look inside your cells and see those cells that are starting to go wrong or about to go wrong and intervene, whether that is surgical removal of something that’s on a trajectory towards nastiness, or it could be what we call chemo prevention, there could eventually be drugs that we can give you that nip things in the bud because we can predict what is likely to go wrong in you.”

For example, while some early cancers are easy to remove, others are in hard-to-reach locations such as the pancreas.

If clinicians are able to identify which individuals are at greatest risk of developing pancreatic cancer, they could possibly be treated with a chemotherapy preventative pill to stop it developing.

They also have high hopes for MRI screening for lung cancer, which is being piloted on the NHS more broadly after a successful trial where scanners in vans were driven to a Manchester shopping centre.

And breath tests which could potentially detect a range of cancers are currently being trialled in Cambridge.

The alliance will be given more than £55 million to get it up and running over the next five years.

They hope they will be able to attract further funding from philanthropic donations, and by working closely with the pharmaceutical, imaging and diagnostics industries.