Overcoming negativity one step at a time

In her video this month Claire re-tells the inspirational story of Kate Allatt who overcame locked-in-syndrome and the negativity of the medical staff around her to recover her communication skills and walk out of hospital.

03.07 Finding a system for communicating

04.04 Overcoming paralysis one movement at a time

Hi, welcome back to my channel.

I'm Claire for anyone who doesn't know me and if you're coming back for a second time or third time then welcome back today.

It was her inspirational story.

So I'm going to share that with you today. Hoping that it will inspire some of you out there because it really inspired me. I was inspired by what she had to say and the incredible journey that she went through.

I think sometimes it's easy to be demotivated and think you can't do certain things. But the reality is we can do whatever we put our mind to.

In 2010, this woman called Kate had a brain stem stroke, a very like severe type of stroke.

She was put into a medically-induced coma. She was 29 at the time. She had three children who were 6, 8 and 10. So a very young family that she had to look after.

And she was also running a crazy amount each week. So she was very fit and healthy.

So this stroke came completely out of nowhere. The stroke was so severe that she was brought through to ICU and was put in a medically-induced coma when she woke up from the medically induced coma she was trapped in her own body, locked-in syndrome where you can't communicate but you know what's going on.

She could think, see, feel and look, but not speak.

So what she found really difficult was that people (nurses and doctors) would go in and talk over her and talk about her.

Obviously she couldn’t verbally communicate, but there would be different ways they could have got her to communicate.

But they didn't try and didn't make an effort to try and look into her eyes or anything like that.

So basically they weren't addressing her emotional needs.

03.07 Finding a system for communicating

But she didn't feel like her emotional needs were being met because they weren't looking into her eyes. They weren't trying to make an effort with her.

Then one day her really good friend came in and realized that she had a flutter in her eye.

And this was Kate’s first form of communication of any sort.

This meant a lot because she could communicate to her best friend somehow, even if it wasn't speaking. There was still that human interaction that she was lacking for so long.

04.04 Overcoming paralysis one movement at a time

In week eight of her recovery from her brain stem stroke. She decided that she was going to try her very very hardest to move her right thumb. Bear in mind she could not move any limb. Nothing.

The only thing that was able to move was her eye flutter. Everything else was completely paralyzed.

So on week 8 she moved her right thumb three millimetres.

And this was her kind of epiphany moment of, you know, ‘what if I can move my right thumb, it’s the same as all the other muscles and whatever and ligaments and tendons whatever in my body, then I can move the rest’.

So it started out with her right thumb and then she worked on all her different fingers and eventually got all her fingers moving.

Then she said ‘if I can do my hands, which are obviously closer to my brain, now let's try my feet’.

Then she started moving her toes one-by-one and getting them strengthen up.

After she'd made these improvements with moving her thumbs and toes and everything she had a medical review.

On this day she was wheeled into the medical review in her wheelchair with a headrest and this is where the nurses, the doctors, the neuro consultants, the neurophysiologist and her husband...

All of these people were around this table and she was really excited to go to this review because she thought, ‘I'm doing so well I'll be able to get more Physio.

But when she arrived at the review she sat down and the first thing the consultant said was there is no improvement and it's not looking good. Really, really negative.

Day by day the nurses say ‘no significant Improvement… No improvement… still the same as yesterday.

Really negative things, alongside telling the husband that she's probably going to stay in this vegetative state.

And remember, this is horrible for her to listen to because obviously she could understand everything going on around her.

Kate had a tracheostomy at the time. Kate was getting so angry and agitated listening to what the doctors and nurses had to say that she started blowing through her tracheostomy and then they wheeled her back to her room lifted her back into bed “like a sack of potatoes”.

As Kate said, the most important thing to do in these types of situations is find out what is important to that person. Also treat them with empathy and look into their eyes - even if you think they’re nonverbal and might not be able to speak to you. 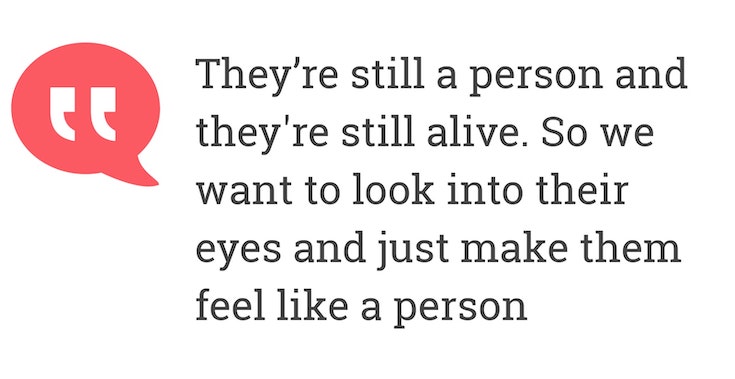 They’re still a person and they're still alive. So we want to look into their eyes and just make them feel like a person and not like this burden or person just sitting in a hospital bed for weeks and weeks on end.

When she moved her thumb that was Week 8 of being in ICU.

She describes everyone around her, and the bells going off, people dying around her, people shouting - this horrible environment.

People thought that she didn't understand or that she wasn't aware of it. But she heard and saw everything.

So from ICU (she was in ICU for nine weeks) she went to a rehab center. So she was really excited about this and Kate thought, ‘if I go to the rehab center I'll be able to get so much more rehab done’.

In ICU she couldn't move that much and they weren't doing that much physio with her. She got to the rehab center and Kate was no longer nursed one-to-one one, as she was in the ICU.

So Kate said that she wasn't getting the physio that she required and started working by herself.

These were Kate’s two goals:

1. to be able to walk out of rehab when her time was done there

2. and do this on her one-year anniversary

And because Kate is such an inspirational and determined woman she got both of those goals, and grabbed them by the horns and did them.

Kate walked four times further than she'd ever walked when she walked out of rehab and she did this on her one-year anniversary of having his brain stem stroke.

She even did a little run on camera and we saw all of this in our conference when Kate was the speaker.

If anybody else is interested in this story and wants to know more, Kate has actually published a Tedx Talk, which is absolutely crazy.

The title of the Tedx Talk is ‘Voicing inner thoughts matters’.

I hope I did this story justice. There's a lot of detail to it.

So I gave you the main points but what I took from this is that, if you want to do something never give up no matter what anybody says. So I hope I inspired at least one of you today.

• What to expect from your first week at university

• My favourite things about nursing