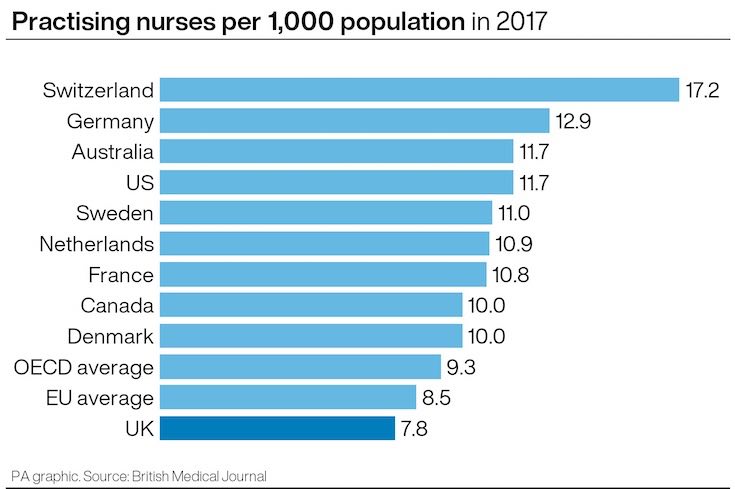 The UK has lower healthcare expenditure than Australia, Canada, Denmark, France, Germany, the Netherlands, Sweden, Switzerland and the US with fewer doctors and nurses per capita.

Spending, outcomes and time with patients - UK behind other countries

The UK lags behind nine other high-income countries when it comes to health service spending, outcomes and how much time doctors spend with patients, research has suggested.

The study, published in the British Medical Journal (BMJ), said the quality of NHS care appears to be “slipping”, with Britons faring worse than their counterparts abroad.

Experts from the London School of Economics and Harvard School of Public Health compared the UK with nine comparable high-income countries: Australia, Canada, Denmark, France, Germany, the Netherlands, Sweden, Switzerland and the US.

They used data, including from the Organisation for Economic Co-operation and Development (OECD), to look at seven key areas of health.

Lowest spend on healthcare per person

The findings showed the UK had the lowest healthcare expenditure per person at £2,978, compared with an average of £4,438 in the other countries.

Even when social care was included, the UK spent less overall than its counterparts, the study found.

Fewer nurses and doctors per 1000 people 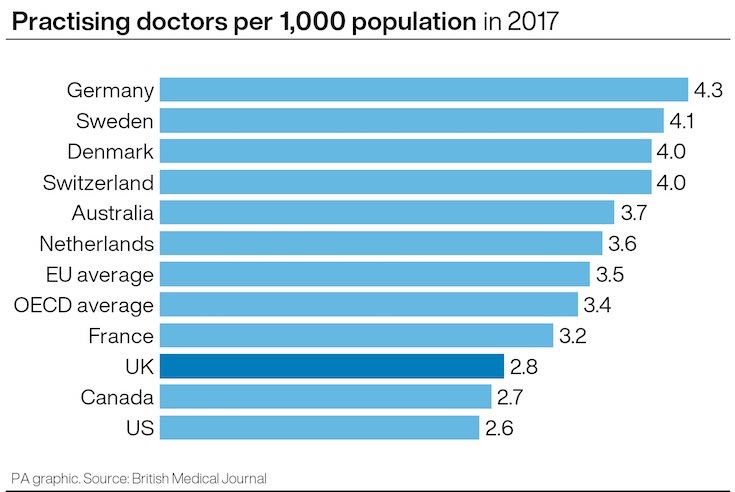 The number of practising nurses in the UK in 2017 was also “considerably lower” at 7.8 per 1,000 people, compared with an average of 11.4 in the other countries.

The report found patients had slightly fewer consultations with a doctor, and GPs in the UK reported spending the least amount of time with patients.

While waiting times for GP appointments were only slightly longer in the UK, 19% of patients waited two months or more to see a specialist, compared with a 12% average in other countries.

The UK had the lowest survival rates for breast and colon cancer, and the third highest number of preventable deaths.

The country was also behind on the proportion of patients suffering sepsis after abdominal surgery, and death within 30 days following a heart attack, or three days after a stroke.

• fewer healthcare-associated infections in the UK

The authors said: “Our study suggests that the NHS should look towards improving staffing ratios, long-term care provision, and social spending, which are lower than comparator countries and have been declining in recent years.

“Despite already low levels of labour, the UK is making do with fewer doctors and nurses, a challenge that is likely to be exacerbated in the context of Brexit.

“Although access to care compared favourably to other countries, utilisation was lower than average and quality seems to be slipping. Health service outcomes, as well as heath status, are sub-optimal.”

The study said the UK “will almost certainly need to spend more on healthcare staffing, long-term care, and other social services” in the future.

More spending will be needed by next Government

Labour has said it will spend more – £6 billion extra a year by 2023/24, which the Lib Dems have pledged to match.

Mark Dayan, policy analyst at the Nuffield Trust, said: “Our work last year with the Institute for Fiscal Studies, King’s Fund and Health Foundation showed the UK lags behind on many areas of cancer and in overall avoidable deaths for killer diseases.

“But the NHS does appear relatively efficient, and actually has perfectly normal waiting times despite the complaints we so often hear.

“This report is right to point to low levels of key staff as an underlying concern.

“Another standing problem is the low level of equipment, with MRI and CT scanner levels the lowest among comparable countries.”