Data from NHS England shows just 79.8% of A&E patients were seen within four hours in November, against a target of 95%. 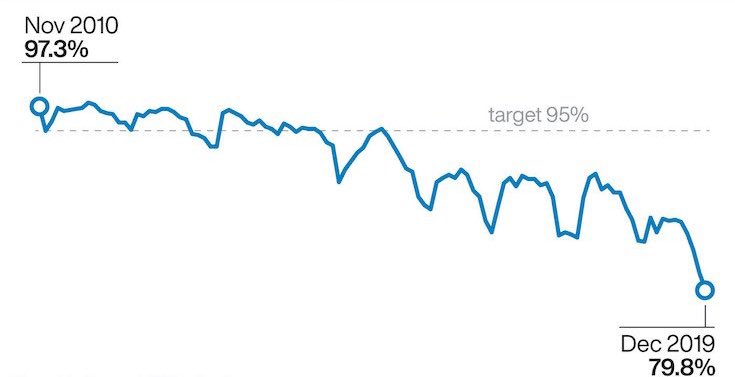 Increasing numbers of patients are waiting more than four hours to be seen at A&E departments, which also saw a record number of attendances and ambulance callouts in December.

Data from NHS England shows 79.8% of A&E patients were seen within four hours in November – the worst figure on record and set against a target of 95%.

This resulted in 4,307 extra attendances per day – the highest number on record.

More than a fifth of people who attended emergency departments had to wait more than four hours to be seen, assessed and treated.

Downing Street said winter was “always challenging” for the NHS.

Niall Dickson, chief executive of the NHS Confederation, said the figures “represent a cry of despair from a service that is delivering remarkable care to millions of patients, but is under enormous pressure”.

Katherine Henderson, president of the Royal College of Emergency Medicine, said: “The NHS is struggling to escape its spiral of decline. With a record low in terms of four-hour performance and highest ever number of 12-hour waits, this will have been a miserable Christmas period for many patients and staff alike.”

Nuffield Trust chief economist Professor John Appleby said: “These would be dire performance figures for any December but what’s worrying is that we are still awaiting the truly cold winter weather that we know will plunge the NHS into further problems.”

Other figures said the repeated missing of targets seemed to have become “normalised”, and that their warnings had fallen on deaf ears.

Dr Nick Scriven, immediate past president of the Society for Acute Medicine, said: “Sadly the failure to meet the access targets for years now seems to have been ‘normalised’ and appears to be routinely ignored or, perhaps worse, minor parts of the data spun for any positive effect that can be gained.

“The really depressing fact is that we have been warning the government and NHS leaders that this is happening time after time and feel our concerns have been largely ignored or marginalised.”

The British Medical Association called the winter figures “truly alarming”, and asked “How many wake-up calls does the Government need?”.

The GMB union said the struggles were “a direct result of a decade of Conservative Government”, calling for leaders to deliver a proper rescue plan.

“With a large majority and a commitment to record investment, the Government has no excuse for inaction.

“Einstein defined insanity as doing the same thing over and over and expecting a different result. More cash without reform is doing just that.”

The NHS figures also show that ambulances attended 790,294 incidents in December – the busiest month on record and a 5.3% increase from the same month the previous year.

About 10,000 callouts were to the most serious, life-threatening cases – again the highest number recorded in a month and a rise of 16.6% from the previous year.

This is an increase of 14.2% in three years, according to NHS England.

Professor Stephen Powis, NHS medical director, said: “We have got more hospital beds open than last winter, but flu has come early and is around twice as high as this time last year.

“For the public there is still time to get your flu jab, and remember to use the free NHS 111 phone and online service and your local pharmacist.”

The Prime Minister’s official spokesman said: “Over two million people attended A&E last month, that means that dedicated staff cared for over 70,000 people every day – the highest ever for December.

“We have invested an extra £240 million in adult social care to get patients home quicker and an extra £1 billion for immediate hospital upgrades.

“Improving the NHS is a priority of the Prime Minister and a record cash boost worth £33.9 billion extra by 2023/24 is being enshrined in law by the Government.”

Away from emergency care, the estimated total waiting list for treatment, such as knee and hip replacements, is estimated to be 4.6 million people at the end of November.

Around 84% of those on the waiting list had been waiting less than 18 weeks, thus not meeting the 92% standard.

Cancer waiting time targets were also missed, with tens of thousands of people still experiencing delays in diagnosis and treatment.