NHS hospital staff organised an entire wedding in just one day so that a woman with terminal cancer could get married. 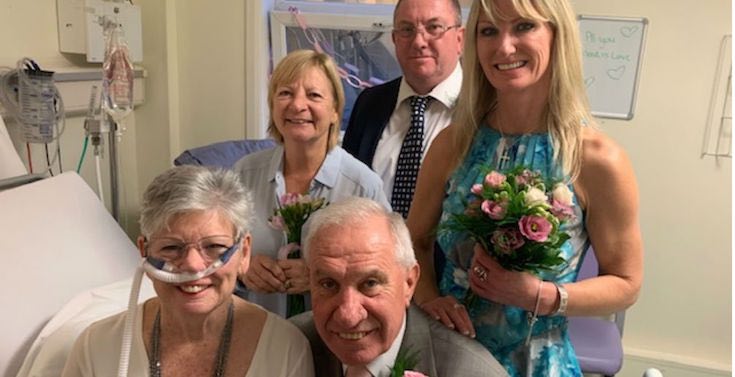 Pauline Manning and her family on her wedding day at Queen Elizabeth The Queen Mother Hospital in Margate, Kent

Family praise NHS staff - "they couldn't have done anything better"

Pauline Manning was married for just eight days before she died aged 70 on Sunday, but her grieving husband Alan Christie and family have praised NHS staff for everything they did for her.

The couple, who had been together for 40 years, tied the knot at Queen Elizabeth The Queen Mother Hospital in Margate, Kent.

Hospital staff went to extraordinary lengths to make the day as special as possible, transforming a side room on the ward into a wedding venue for the ceremony.

They covered medical equipment with sheets and hung fairy lights and balloons to create a magical wedding for the couple.

Retired area resource manager Mrs Manning, from Sholden, near the seaside town of Deal, met Mr Christie at a dance in August 1980.

The pair had often talked about getting married, but they never got around to arranging the ceremony. 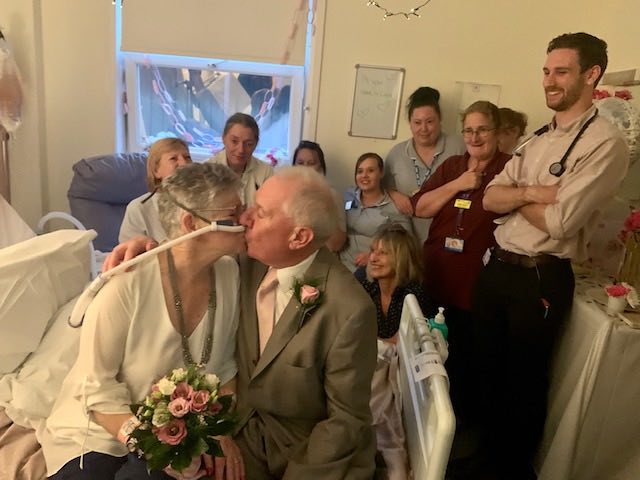 However, when Mrs Manning received her tragic diagnosis they decided there was no time like the present.

A date was set for Friday November 15 and the entire wedding was organised in just one day.

Mr Christie, a retired insurance broker, said: “Pauline always wanted a simple ceremony so that’s what we did.

“While I went to the registry office to do the paperwork, the staff helped get Pauline ready.

“They lent her a silver horseshoe and something blue, brought in non-alcoholic champagne and confetti and helped make it a fantastic day.”

Mrs Manning’s children Nina and Scott were witnesses, and her sister Julie acted as best man and gave her away.

They were also tasked with making arrangements, with the children managing to source flowers and a ring in just one morning thanks to Merrygardens florist and CJ Howe jewellers in Deal.

Scott found a pink tie in the town’s Sue Ryder charity shop, after having no luck in other shops.

Mr Christie said: “It was like a wedding supermarket sweep – they dashed around Deal getting everything we needed.

“We had the traditional ceremony and brought in a white chocolate cake as a wedding cake.

“The staff provided more cake, and just made everything lovely. The room was full as they all wanted to come and watch us get married.

“They couldn’t have done anything better, and Pauline’s care was fantastic all the way through.”

Mrs Manning was allowed to go home a week after the ceremony but deteriorated that night and was admitted to the Pilgrims Hospice in Canterbury on Saturday afternoon.

She died in the early hours of Sunday morning. 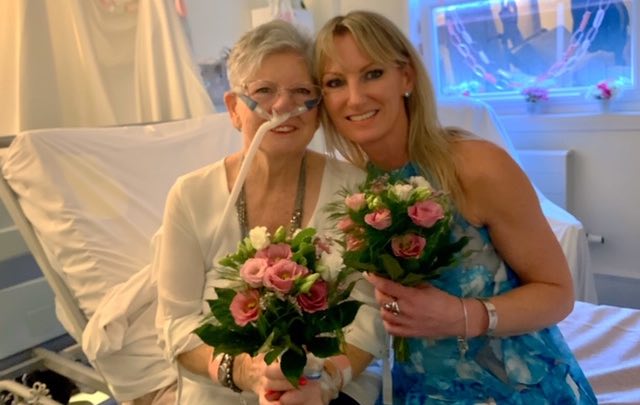 Pauline Manning and her daughter Nina

Her daughter Nina said: “Once again we had some incredible help from two district nurses at our home who wouldn’t leave my mum’s side or leave us in despair, and also the ambulance service and Kent fire service who helped transport her from home to the hospice.

“It was an incredibly distressing and difficult time which was made easier by everyone’s professionalism and compassion.

“The nurses at the hospice were also amazing, showing great kindness and compassion to my mum and also to us at such a distressing time.

“We are so grateful to everyone involved in looking after mum for their incredible care and dedication, and pleased that she and Alan were able to realise their dream of being husband and wife, even if only for the shortest time.”

• Thank You Nurses - patients spread their love and thanks