All the major political parties have pledged to do more for the health service if they win the election, including increasing funding. 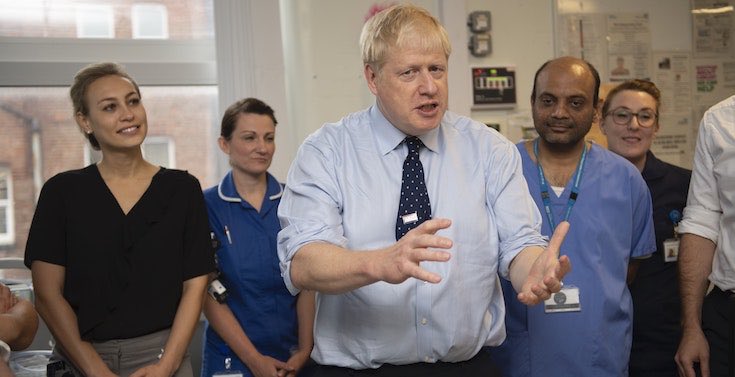 Boris Johnson says Tories must do better on NHS

The NHS is experiencing its worst ever performance in A&E, and thousands of people face rising waits for operations and cancer treatment, according to the last set of monthly health data before the General Election.

New figures from NHS England show a continuing decline against key targets, as health experts warned the health service was facing one of its “bleakest” ever winters.

Labour leader Jeremy Corbyn said it was “disgraceful” the four-hour A&E target was not being met, while Health Secretary Matt Hancock said “these figures show just how important it is that we stop Jeremy Corbyn”.

All the major political parties have pledged to do more for the health service if they win the election, including more funding for health and social care.

One in six waited longer than 4 hours

The new NHS data shows that one in six patients waited longer than four hours in A&E in England during October – the worst-ever performance since the four-hour target was introduced in 2004. 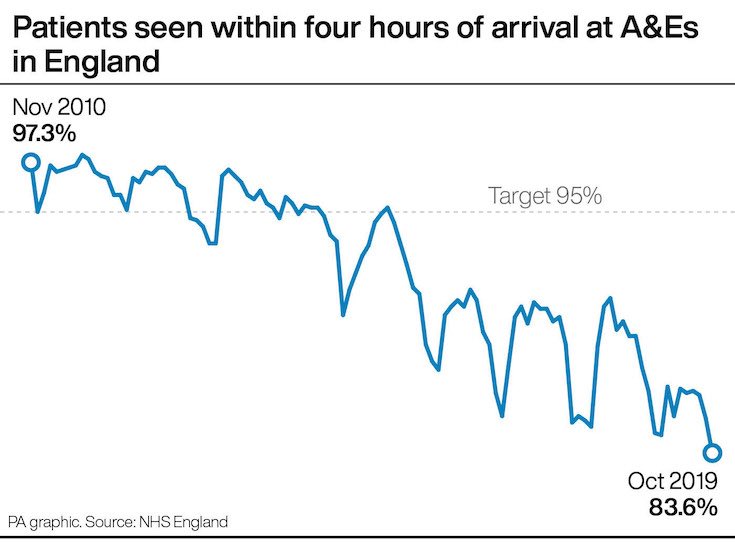 Patients seen within four hours of arrival at A&Es in England.

Some 83.6% of patients arriving at A&E were treated or admitted in four hours.

The data also showed that in September, 84.8% of patients started treatment within 18 weeks against a target of 92%.

The target was last met in February 2016. The target to start cancer treatment within 62 days of an urgent referral is also being missed.

Some 76.9% of cancer patients started treatment in 62 days in September, below the 85% target.

Overall, more than 4.4 million patients are on the waiting list.

The data comes as the Royal College of Surgeons called on political leaders to keep the 18-week wait for planned treatment – which is currently under review and could be scrapped. 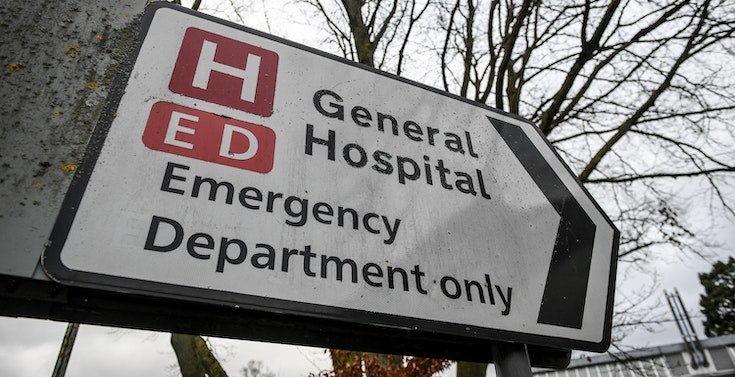 Nuffield Trust chief economist Professor John Appleby said: “These figures show the next government will immediately be faced with one of the bleakest winters in the NHS’s history.”

Prof Appleby added: “We have many months to go until seasonal pressures really hit the NHS, but October has already seen an unprecedented slump, with performance against the main A&E target worse than ever.

“The health service is seeing far more patients, yet one in six is now waiting more than four hours in A&E. If the usual trends continue after Christmas, that would head towards one in five.

“Meanwhile, the number of people waiting on trolleys in corridors because no beds are available has already hit 80,000 – something we have only seen before in the very coldest part of the year.

“If this trend keeps going, I fear we could see 100,000 people stuck on trolleys this coming January.

“As the election promises roll in, we should be under no illusion about the money, staff and time it will take to turn this situation around.”

Richard Murray, chief executive of the King’s Fund, said: “Amidst the political rhetoric of the General Election campaign, today’s statistics lay bare the stark reality for patients across the country who are struggling to access NHS hospital services.”

The Society for Acute Medicine said acute and emergency care in the NHS was “imploding” before the expected winter crisis hits. Mr Corbyn said the four-hour A&E target and the two-week wait on cancer were brought in by the previous Labour government, “neither of which are being met across the whole country”.

He added: “It is disgraceful and it is a problem of the lack of staff and the lack of funding for it.”

Mr Hancock said: “These figures show just how important it is that we stop Jeremy Corbyn.

“With rising demand, and with dedicated staff already working exceptionally hard, the last thing our NHS can afford is Labour’s plans for a four-day week and uncontrolled and unlimited immigration, which would cripple our health service – leaving it understaffed and underfunded.” 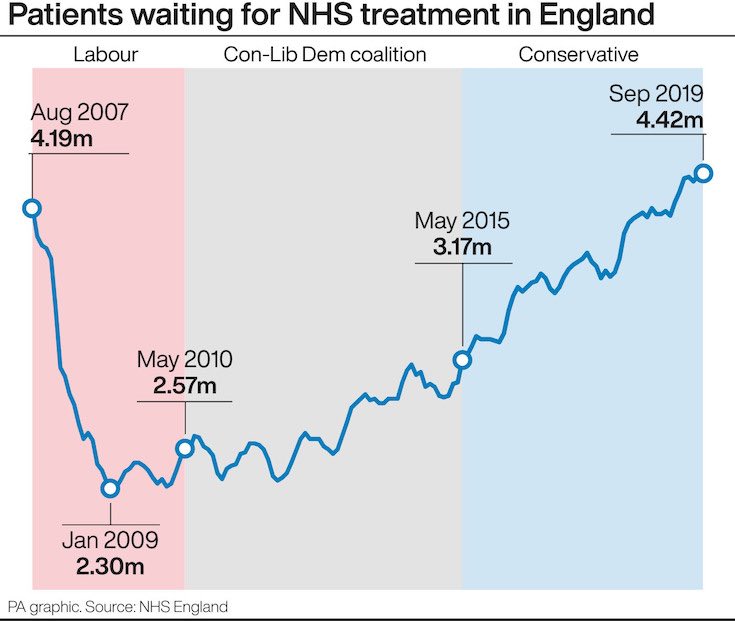 Boris Johnson says Tories must do better on NHS

Boris Johnson has said the Tories “have got to do better” on the NHS after key figures showed the service was performing at the worst level on record.

Health Secretary Matt Hancock was accused of being “staggeringly out of touch” after he claimed on Thursday that the NHS was performing “better than it ever has”.

After official figures showed a record 4.42 million people were waiting for treatment, the Prime Minister – who has made the NHS a key battleground in the election – said they had to do more.

Liberal Democrat health spokeswoman Luciana Berger said: “This is a damning indictment of the Conservatives’ dismal record on the NHS.”

In March, NHS England announced proposals to scrap the key targets for patients to be seen in A&E within four hours, or to receive an operation within 18 weeks.

Instead, figures would be published on how long patients spend on average in A&E and the 18-week target would be replaced by an average marker of the time it takes to start treatment.

The Royal College of Surgeons and the charity Versus Arthritis called on party leaders to safeguard the 18-week target.

Writing to all party leaders, Professor Derek Alderson, president of the Royal College of Surgeons, and Liam O’Toole, chief executive of Versus Arthritis, said: “Despite being a statutory requirement, the 18-week standard has increasingly been forgotten.”

• Election pledges for the NHS

• 2018 - What does the impending winter crisis mean for nurses?