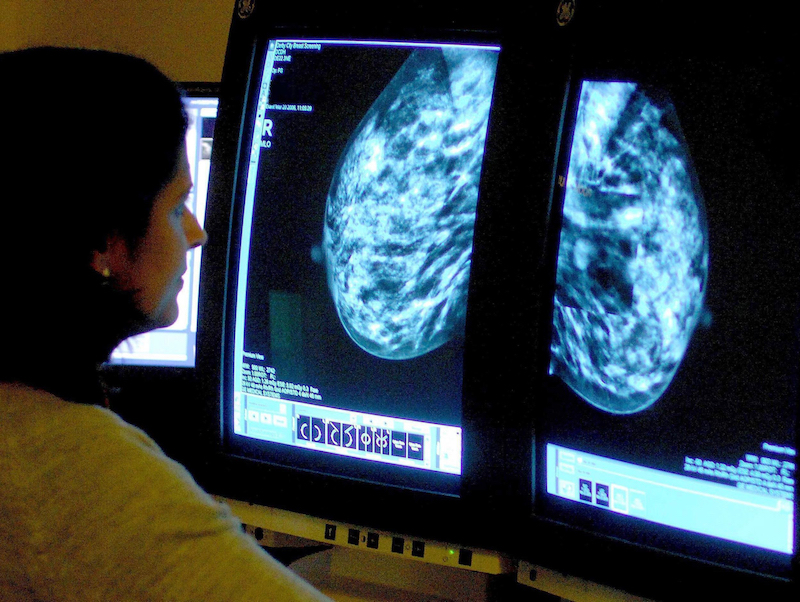 Menopausal hormone therapy (MHT) has been linked to an increased risk of breast cancer which can persist for more than a decade after usage stops.

For every 100 women using oestrogen plus daily progestogen MHT, two extra cases of breast cancer were identified between age 50-69, according to researchers from the University of Oxford.

After stopping use, some excess risk was found to persist for more than 10 years – with the size of the risk linked to the duration of previous use.

The researchers said that if the associations are causal, this means MHT use has already caused around one million breast cancers in western countries – one-twentieth of the total since 1990.

The global analysis used data from more than 100,000 women with breast cancer from 58 epidemiological studies worldwide.

The researchers found that all types of MHT, except topical vaginal oestrogens, were linked to an increased risk of breast cancer.

Women tend to begin MHT at around the time of the menopause, when ovarian function ceases, causing symptoms including hot flushes and discomfort.

Although regulatory bodies in Europe and the USA recommend MHT be used for the shortest time that is needed, some clinical guidelines recommended less restrictive prescribing.

About five years of use is now common.

Co-author Professor Valerie Beral from the Nuffield Department of Population Health, University of Oxford, said: “Our new findings indicate that some increased risk persists even after stopping use of menopausal hormone therapy.

“Previous estimates of risks associated with use of menopausal hormone therapy are approximately doubled by the inclusion of the persistent risk after use of the hormones ceases.”

She added: “Before all we knew was that the risk was increased when they used, the belief was that it went away when they stopped.

“The main finding is that we now know the long-term effects, that the risk persists for more than a decade after stopping.”

The authors found that 108,647 women developed breast cancer at an average age of 65 – and almost half of these had used MHT.

For women in western countries who have never used MHT, 6.3 women in every 100 on average go on to develop breast cancer between 50 and 69.

This was for those who took the treatment for five years, starting at age 50.

Risk twice as great if MHT used for 10 years

Researchers also found that the risk was twice as great for women who used MHT for 10 years.

There was little excess risk after using any form of MHT for less than a year.

Professor Richard Peto, Professor of Medical Statistics and Epidemiology also of the Nuffield Department of Population Health, University of Oxford, said the findings suggest MHT is causing an increased risk of breast cancer. 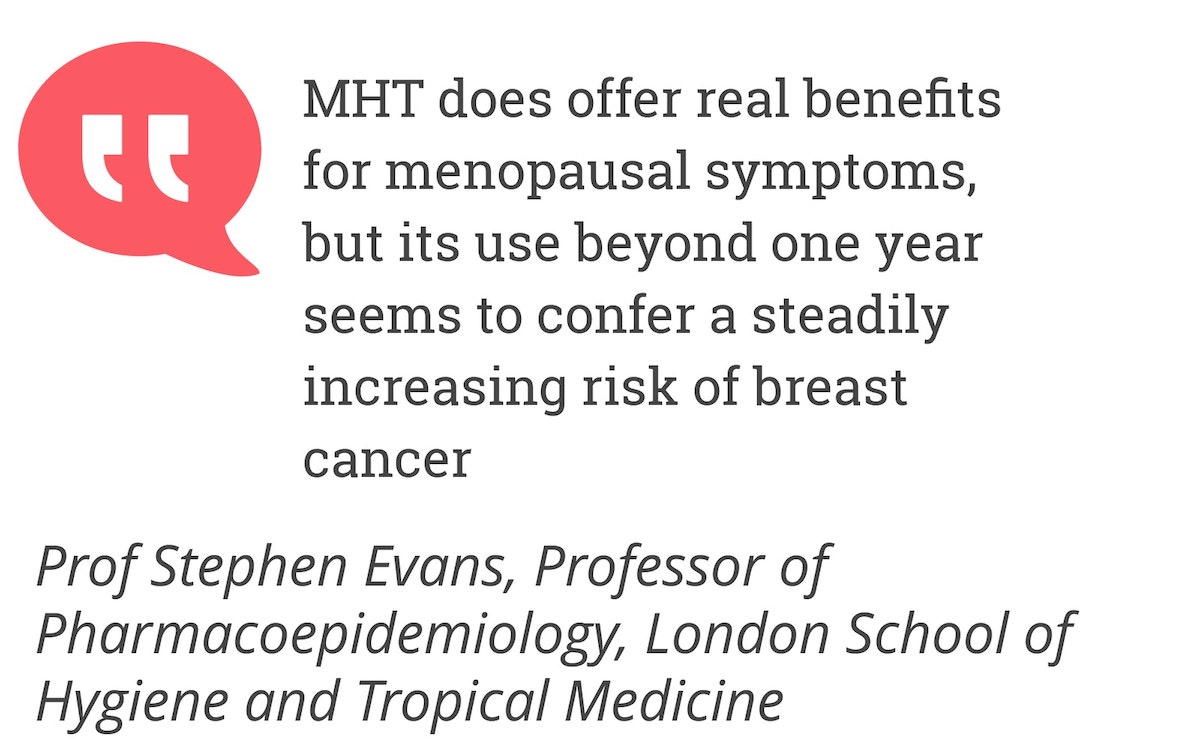 Prof Stephen Evans, Professor of Pharmacoepidemiology, London School of Hygiene and Tropical Medicine (LSHTM), said: “These results should not be used to cause alarm among women, but there is no doubt that they should follow the advice given by the MHRA in the UK and the FDA in the US that MHT be used for the shortest time that it is needed.

“MHT does offer real benefits for menopausal symptoms, but its use beyond one year seems to confer a steadily increasing risk of breast cancer with increasing years of use.

Cancer Research UK - insight we didn't have before

Dr Julie Sharp, head of health and patient information at Cancer Research UK, which funded the study, said: “This extensive international study gives us insight into hormone replacement therapy (HRT) that we didn’t have before. 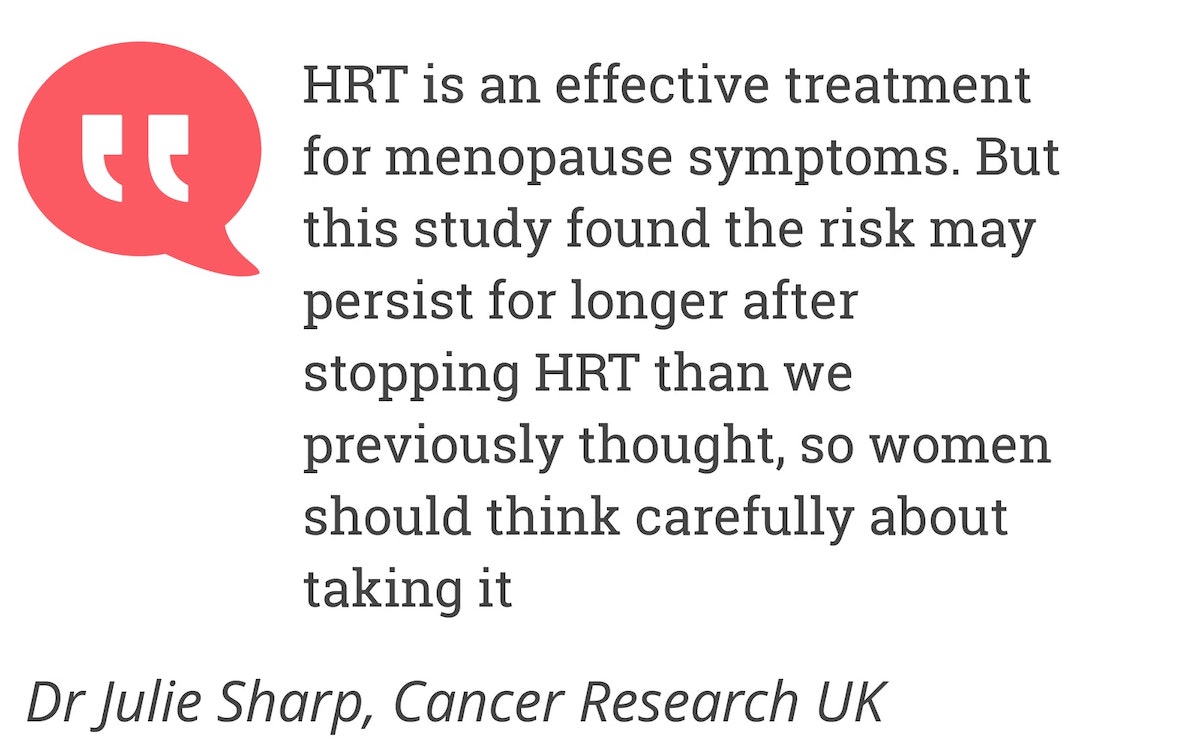 “HRT is an effective treatment for menopause symptoms, and we’ve known for some time that it raises the risk of breast cancer.

But this study found the risk may persist for longer after stopping HRT than we previously thought, so women should think carefully about taking it.”

The authors of the study published in The Lancet set out a number of limitations, including that there is still not long enough follow-up after cessation of prolonged MHT use by women who had started some years of hormonal treatment at around the time of menopause.

Another limitation is that the collaboration sought information only on breast cancer incidence, not mortality.