Play video: "I know it's super difficult when you're on night shifts to still see friends but I think that is something that we don't want to just let slide."

I know it's been a really long time and I'm super sorry for that, but I'm back now.

Today's video, I want to talk about night shifts and this is something that when I first wanted to be a nurse or go into nursing, people would say to me, "But you'll have to do nights. What are you going to do?" and everything like that.

I've only done about 10 night shifts, I think, in my life.

But from those 10 night shifts, I picked up a few things that I just think would help people.

Maybe if you're do night shifts on placement or you're qualified. So yeah, let's just jump right in.

So the first thing is just to manage sleep patterns.

And it's so hard when you're working all night, when normally you're meant to be sleeping.

But trying to get that sleep in the day makes a huge difference.

So if you just try and sleep during the day for a little bit, especially before your first night, it's obviously really hard because you've slept all that night and then you're up during the day.

But to have a nap before your first night, then go to your night shift.

But make sure after that night shift that you try and sleep a lot during the day after your night shift and on to the second, third, how many you're doing.

And that way you won't be sleep-deprived and stuff like that.

It is super difficult though and I find it just messes up my clock in every way, shape and form.

But they are possible and people do do them.

But I think staying on the same pattern is not as hard.

So that's my tip just to keep your sleep pattern if you can.

I know it's so difficult, but yeah, that's the best tip I've got.

Another thing I found so difficult on nights is, when do I eat? I don't know.

So I try to stick to a normal eating pattern as much as possible.

So I'd have a big dinner before I went to nights and then I wouldn't eat that much at the nights.

But obviously, you're working all night so you do get really hungry.

So I think I remember having a nice big snack on my break.

But it's difficult because it's like normally you're not used to eating during the night.

So that really puts me off, but one thing I found super important or useful was to meal prep.

So that meal before I go to nights, that was the most difficult because I'd be trying to get my uniform ready, trying to get everything ready.

And the last thing I'd want to do is cook a nice healthy meal.

So I'd make a big Curry at the start of that week and then portion that out for myself, so it was super easy to just grab.

Just getting good meals in without sacrificing time or being late or anything like that.

Obviously it's not normal to do all nighters as such, so make sure if the ward you're on allows you sleep time, then to take that.

I know in theaters and recovery, the nurses there, obviously the operations throughout the night are mainly emergencies.

So they could sleep during the down periods and then obviously, we all go once the patient's out of theater.

It really depends on the ward.

I've been lucky enough to got about two hours sleep, which I know some people will say they didn't even get any. 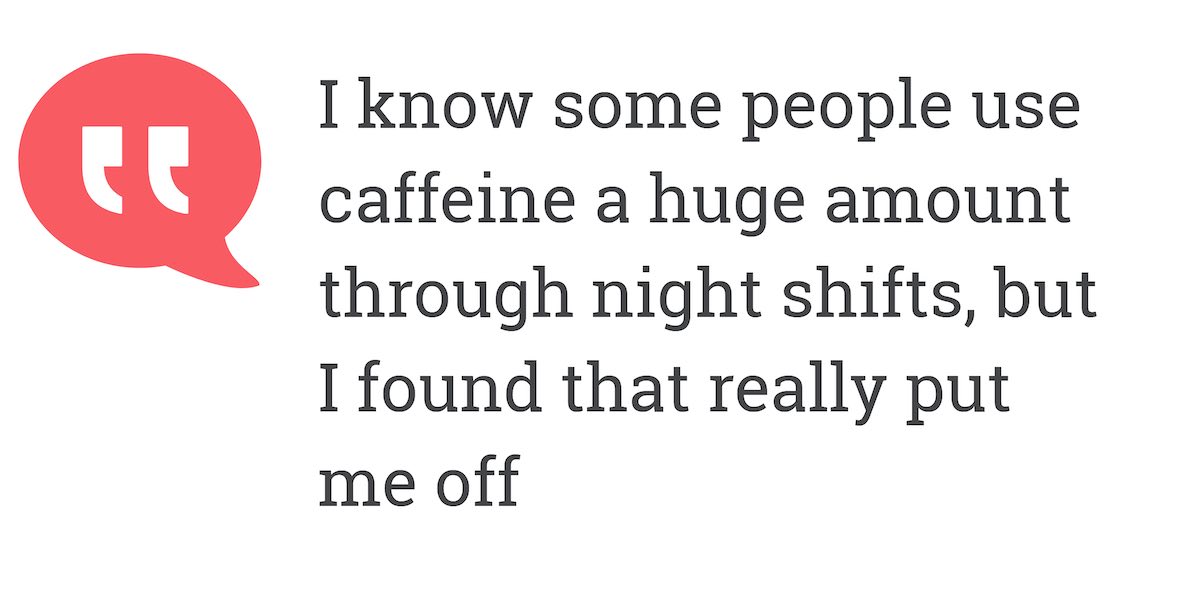 I know some people use caffeine a huge amount through night shifts, but I found that really put me off.

So if I was drinking coffee all night and then I'd get off the shift and try and go home to have a nap or to sleep for that day, it threw me off so much.

I wouldn't know what to do.

I'd be wired, but I'd been awake all night.

And then it'd be the morning, I'm bright, but I'd still have to sleep.

Oh, another thing I found, if you can at all, try and get something blackout.

And I remember in my old house I'd have to put up paper bags and pillow cases and make a patchwork thing.

Luckily, now I have blackout blinds, but didn't have that before and that makes a huge difference.

Because then when you come home from your night shift, when you're sleeping the next day, it makes you feel like it's actually nighttime instead of just the middle of the day, like it actually is.

I know it's super difficult when you're on night shifts to still see friends and still do things that you really like doing.

But I think that is something that we don't want to just let slide just because we're doing these types of shifts.

And it's so easy to be like, "Oh, but I'm not on nights. I can't see you or I got to sleep" and all things like that.

And of course, that is completely true.

You do have to sleep and be refreshed, but you can still manage to see people and meet up with people and still feel really just refreshed and ready.

And you can still go for a coffee or wisely, go for a walk.

I know it's super difficult as well to get in exercise, I just completely stopped going to the gym when I was in nights.

Because just because I'm on nights, now I stopped going to the gym and they really can, point blank, just mess up your sleep schedule.

But there's ways of doing it and I hope that these little tips help a little bit.

And if they did, please comment below and it's really good to be back.