England “might well end up with mandatory” vaccines , the outgoing Chief Medical Officer has said, as she recalled looking after two children who died from measles. 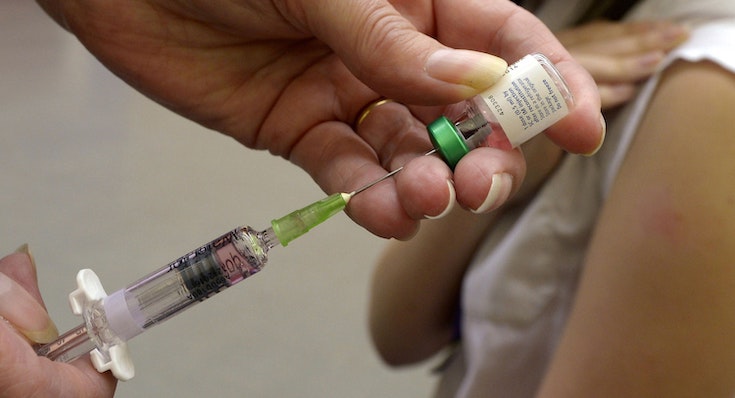 Vaccines may end up being compulsory if immunisation rates fail to rise, Professor Dame Sally Davies has said

Professor Dame Sally Davies said she hoped other measures could be tried first to stem falling immunisation rates, but that it was vital to stop the spread of deadly diseases.

Her comments come after some health experts condemned Health Secretary Matt Hancock for saying he is seriously considering mandatory vaccination.

“I hope we can do it by other means, but if we can’t, we might well end up with mandatory.”

She said it was “important that children are vaccinated”, adding: “I remember looking after two children as they died from measles.”

The latest NHS figures show that fewer children are receiving all their routine vaccinations, including the combined measles, mumps and rubella (MMR) vaccine and those for meningitis.

Proportion of vaccinated children has fallen

The proportion of children vaccinated with all doses of the combined diphtheria, tetanus, pertussis (whooping cough), polio and Haemophilus influenzae type b (DTaP/IPV/Hib) jab by the age of 12 months fell to 92.1% in 2018/19, its lowest level since 2008/09 and below the 95% target.

Earlier this week, researchers said vaccines should be offered in supermarkets, pop-up clinics and at music festivals to help boost immunisation rates.

They argued that, before steps are taken to introduce such an “extreme policy” as mandatory vaccination, clinics should open at weekends and in the evenings to improve access to the jabs.

They said most parents do vaccinate their children but those who do not often have problems attending clinics or simply forget.

A busy family life and needing to take time off work to get children vaccinated are all barriers to people making sure youngsters are up to date, they added.

It's due to busy lives, not fake social media stories

The experts played down the role of anti-vaccination groups on social media, saying trust in social media is generally low in the UK, while confidence in doctors and nurses is high.

Helen Bedford, professor of children’s health at University College London’s Institute of Child Health, said there is an urgent need to look at all the barriers that prevent vaccination.

“What we know is that most people that are under-immunised, it’s about difficulty accessing services,” she said. “To go towards mandation when we don’t have all these other things is just a knee-jerk reaction.”

As well as the ethical issues of forcing people to vaccinate, “there really is no convincing evidence from anywhere that it works”, he said, adding: “We could make things worse.”