The baby was delivered safely after doctors became concerned about its changeable heartbeat following the collision. 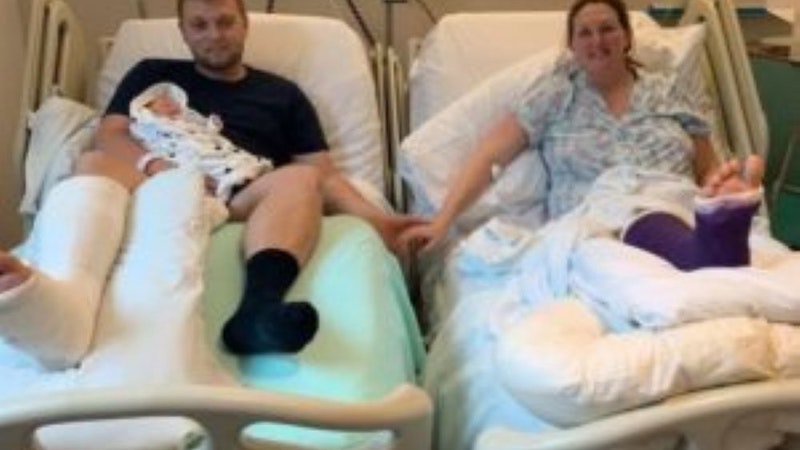 A couple who were separated after being involved in a car crash have been reunited following the birth of their daughter.

Ginny Magrath, 29, had to have her baby delivered by emergency Caesarean after her and Mike Roberts, also 29, crashed on the way to a routine hospital appointment in Telford, Shropshire.

After they both suffered badly broken ankles in the crash they were taken to separate hospitals for treatment, with Ms Magrath going to the Princess Royal Hospital so medics could monitor her then unborn child and Mr Roberts going to the Royal Shrewsbury Hospital.

Doctors decided to deliver the baby four weeks early in an emergency procedure after noticing that its heart rate kept going up and down.

Ms Magrath said her newborn daughter, who has been named Amber Harriet Roberts, is "doing really well" following the birth.

"She seems to be doing everything at 100mph. It's almost like she knows Mike and I need her," she added.

Doctors preparing to operate on engineer Mr Roberts decided to move him to the same hospital where the birth was taking place to keep him closer to his family.

Ms Magrath, who works in pathology, said the consultant "really didn't want to separate us" and the couple have been able to visit each other's wards and both have spent time with their newborn.

All three remain in hospital after Amber was born weighing a healthy 6lb and 10oz.

Ms Magrath added: "From what was a really scary time, the whole experience has just been so positive.

"The care we have had could not have been any better and I would just like to say a huge thank you to everyone who has been involved in our treatment and in going the extra mile to make sure Mike and I could be together as much as possible."