One witness said she was ‘lied to’ by the NHS while another became emotional as he spoke of his teenage son’s death from Aids. 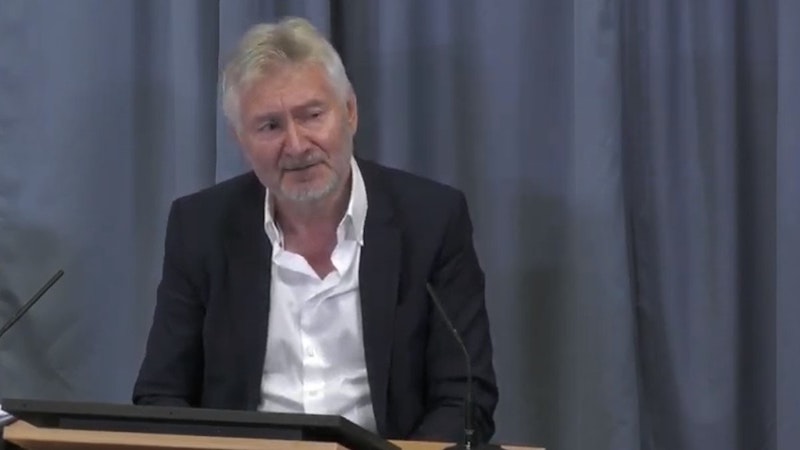 Victims of the contaminated blood scandal have told an inquiry how medical records were “destroyed”.

A father fought back tears as he told the Infected Blood Inquiry his teenage son died of Aids after being infected through treatment for haemophilia, but no hospital medical records exist.

• I was treated like a leper, teenager who cared for mother tells blood inquiry

A woman who contracted hepatitis C through a blood transfusion said she was left feeling “completely rejected by society” after being “lied to” by the NHS, and her missing medical records continue to hamper her treatment.

Thousands of patients were infected with HIV and hepatitis C via contaminated blood products in the 1970s and 1980s, and around 2,400 people died.

The scandal has been labelled the worst treatment disaster in the history of the NHS.

Giving evidence at the inquiry in Edinburgh, John McDougall said his son Euan and brother-in-law Terry McStay both died of Aids contracted through blood products used to treat haemophilia.

He said Terry was the first haemophilia sufferer to die of Aids in Scotland and he had warned before he died against using American Factor VIII to treat haemophilia and that “heat treatment was the answer”.

Mr McDougall said medics at Yorkhill Hospital in Glasgow refused to provide heat-treated products on grounds of cost and efficacy, but within six weeks of Terry’s death they began to do so.

He said: “It think it took that death to spur the appropriate health authorities in Scotland and the UK more widely, certainly in Scotland, into action.

Euan McDougall was diagnosed with HIV in 1985, aged eight. 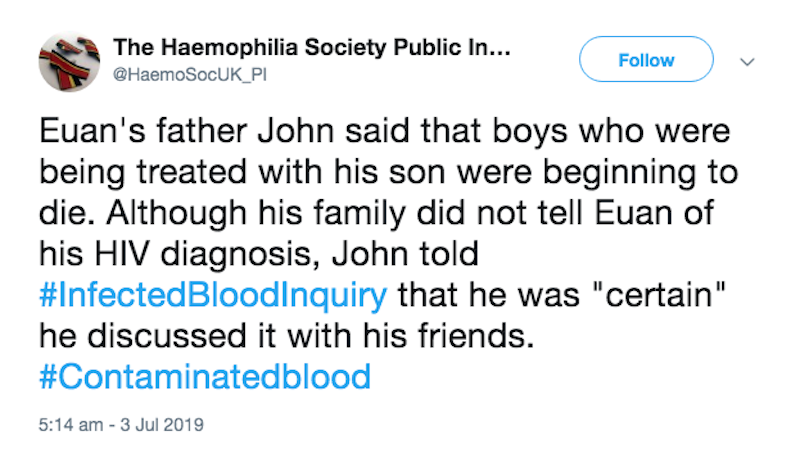 Mr McDougall became emotional as he told how his son suffered bouts of paralysis and gradually went blind before dying in January 1994.

On attempting to access his son’s medical records, he was told there was no trace of them.

He said: “The hospital records disappeared, and are gone, are destroyed.”

Mr McDougall said he wanted to know why Yorkhill continued using American Factor VIII when elsewhere in Scotland its use had stopped, and he also questioned when heat-treated products had started being produced.

The inquiry also heard from Eileen Dyson, who was given a blood transfusion aged 29 following the birth of her son in 1988 but was not diagnosed with hepatitis C until 1994 and given no treatment plan for 14 years.

She told the inquiry of her “callous and heartless” treatment by medical staff and how she had to give up her specialised tax work due to the stigma surrounding the virus.

She said after being given blood following her son’s birth by Caesarean section at Bellshill Maternity Hospital in Lanarkshire, she was told she was a “risk to mothers and babies” and taken from her ward overnight to a sealed unit at an infectious diseases unit at a different hospital.

She said it was “all done in secrecy” and she was given no information on what was wrong.

Months later, she was readmitted to hospital after vomiting blood and told “just drink milk and you’ll be fine”.

But she was then found collapsed on the floor by a patient vomiting blood and was taken for emergency surgery and given 30 pints of blood.

She was informed she was pregnant and would have to return to hospital every three months for blood tests – tests she now believes were doctors using her as a “case study” without giving treatment.

In 1994, she was told she had hepatitis C and said doctors were “evasive” about how she had contracted it, refusing to answer when she questioned if it could have been through blood transfusions.

After carrying out her own research, she called the Scottish Blood Transfusion Service (SBTS) to get the batch numbers of the blood she had been given.

She was first hung up on, and then told she had “never received any blood transfusions”.

She told the inquiry: “It was at that point I knew I was being lied to.” After being told by a lawyer there was nothing she could do, she said she felt “completely abandoned”.

She said: “I also felt I was of no value in society. I felt completely rejected by society at all its levels.”

She was later told by Glasgow Royal Infirmary that all her records “had been destroyed” despite having to attend for eight years, and the situation was similar at Wishaw General Hospital.

Ms Dyson, who is free of hepatitis C after treatment in 2015 but expects to need a liver transplant, said around a year ago while being treated in Wishaw General she informed staff of her medical history and was told that was “very unlikely” by workers who “ridiculed” her and “smirked”.

She said: “The impact of having your medical records removed is not something from the past, it’s going to affect me for the rest of my life.”

The SBTS apologised for Mrs Dyson’s treatment and said its transfusions were “the most likely source” of her infection.