Calls for NHS hospitals to be made totally smoking-free

Some still allow smoking in their grounds despite calls for a total prohibition. 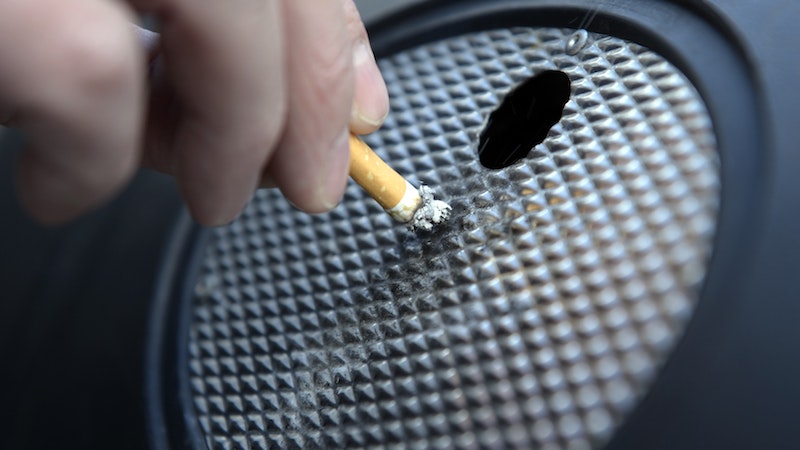 Almost one in three NHS hospitals still allow smoking on their premises, despite health chiefs calling for a ban since 2013.

Smoking in hospitals grounds is banned by law in Northern Ireland and Scotland and a legal ban is set to be introduced in Wales by the end of this year.

But it is not illegal to smoke in hospital grounds in England. In 2013, the National Institute for Health and Care Excellence (Nice) said NHS hospitals in England should ban smoking on their premises and staff should be told not to help patients who want to smoke.

And in November 2016, PHE’s chief executive Duncan Selbie wrote to the chief executive of every NHS Trust in England, calling for their personal commitment to work with PHE towards a “truly smokefree NHS”.

Some 69% of NHS acute trusts in England (100) now ban smoking completely on their grounds but 31% (45) have not yet enforced total smoking bans across hospital premises.

Of these 45 trusts, 11 did not respond to questioning but were told by PHE it would be assumed they did not have a smoking ban in place.

PHE declined to name those trusts that have failed to become smokefree, saying it had guaranteed their anonymity.

However, it named some trusts that are performing well, including Northumbria Healthcare NHS Foundation Trust, which has replaced all its smoking shelters with trees and plants.

The NHS Five Year Forward View included a commitment for all trusts to have fully smokefree sites by spring 2020.

Mr Selbie said: “One in four hospital beds are occupied by a smoker and most of them want to quit.

“Many patients or visitors will be going through difficult times but smoking remains England’s biggest preventable killer and it is time for the NHS to stop smoking within its hospital grounds, everywhere.

“It cannot be right that it is more acceptable in some hospitals to smoke at the front door than it is outside a pub.”

As well as encouraging trusts to prohibit smoking on site, PHE’s Smoke-free NHS campaign says all patients who smoke should be offered support to quit.

Public health minister, Seema Kennedy, said: “No-one should have to walk past a cloud of smoke in order to enter or leave their local hospital, we must lead by example and I am determined to see a smoke-free NHS by 2020.

“Smoking is still one of the biggest causes of death in this country and through our NHS Long Term Plan, every smoker admitted to hospital will now be offered targeted NHS support to quit.

“I am encouraged by this new survey, which shows great strides have already been made towards a smokefree NHS, I strongly urge all trusts to follow suit.”

“Smoke-free NHS premises are an important part of this drive, and the successful schemes we are seeing already provide a blueprint for other trusts to achieve this over the coming year.”

Dr Penny Woods, chief executive of the British Lung Foundation, said: “The fact that people are still smoking outside hospitals shows a clear failure in helping patients and their families to quit smoking.

“We fully endorse plans for every smoker in hospital being offered NHS support to quit, however addressing smoking is the responsibility of our entire health service. It shouldn’t take someone being admitted to hospital for them to get help.

“Tobacco dependency is an illness, every person who smokes should be able to get medicine and support from their GP or from a specialist service to help them quit.”