In the UK, there are only seven radiologists per 100,000 people, ‘significantly below’ the EU average of 12, according to a new report. 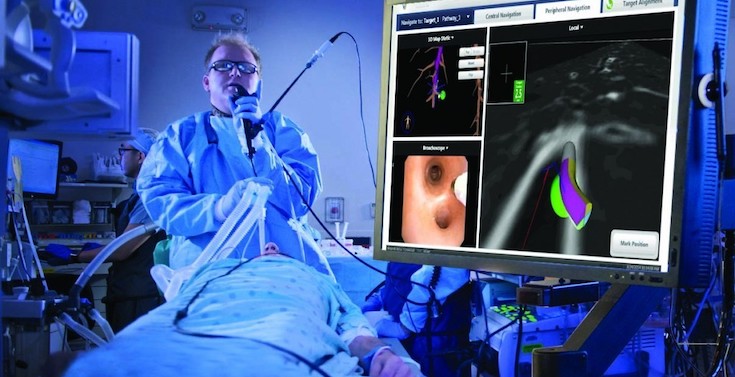 Too few scanners and staff to operate them

Patients with lung cancer – the disease that killed former Emmerdale actress Leah Bracknell – are at the mercy of “woefully poor” NHS equipment, according to a new report.

The study, from the UK Lung Cancer Coalition (UKLCC), said there are not enough scanners or staff to operate them, putting the NHS far behind other European countries, including France, Germany and Spain.

Experts behind the study also said a simple admin job could double the number of patients treated quickly but local cancer networks are struggling to fund the position.

He said patients suffer delays in getting diagnosed and subsequent treatment due to NHS problems.

He said: “Our diagnostic capacity is woefully poor. “CT scanning rates, for instance, are much lower than those in France, Germany or Spain.”

In the UK, there are only seven radiologists per 100,000 people, which is “significantly below” the EU average of 12, the report said.

And the UK’s CT scan capacity of eight scanners per million people is also significantly lower than European average of 21.4.

The same is true for MRI scanners, the study added. There are 6.1 MRI scanners per million people, compared with an EU average of 15.4.

Lung cancer is the third most common cancer in the UK and kills more than 35,000 people every year.

The UK currently lags at the bottom of an international league table for five-year survival, with just 14.7% of people with lung cancer still alive five years after diagnosis.

Almost half of all patients diagnosed when cancer is already advanced

Almost half of people in the UK (48%) are diagnosed when their cancer is already at an advanced stage. In 2017, a National Optimal Lung Cancer Pathway (NOLCP) was introduced to speed up diagnosis and treatment.

One of the aims is to cut the time from a patient being referred to receiving their first treatment from 62 to 49 days.

The new report said a patient pathway navigator can help to more than double the number of lung cancer patients receiving treatment by day 49.

However, securing funding for the role remains “challenging”, according to interviews among 17 of the 19 regional cancer alliances.

A navigator works by tracking appointments, chasing test results, ensuring that missed appointments are rescheduled, and is a point of contact for patients. Professor Mick Peake, chairman of the UKLCC’s clinical advisory group, said employing a patient pathway navigator at a cost of around £20,000 to £25,000 a year is a “no-brainer”.

He said: “Our report highlights that appointing an administrator to manage the lung cancer pathway, which involves no clinical knowledge, is one of the important ways we can speed up the patient’s journey and improve lung cancer survival. It’s an absolute no-brainer.”

The report also calls for radiologists to directly refer patients with suspicious chest X-rays for immediate further investigation – rather than returning them to the patient’s GP for next steps.

The UKLCC is made up of senior NHS lung cancer doctors, charities and health firms.

A Department of Health and Social Care spokesman said: “Cancer survival rates are at a record high and we’re driving millions into effective diagnosis and screening – but want to save even more lives.”

“We recently announced £200 million for new state-of-the-art diagnostic machines to improve the quality and speed of cancer diagnosis, and through our NHS Long Term Plan we will detect more cancers at an earlier stage, saving an estimated 55,000 lives a year.