Consuming less than 200ml a day increased the risk by 18%, experts reported. 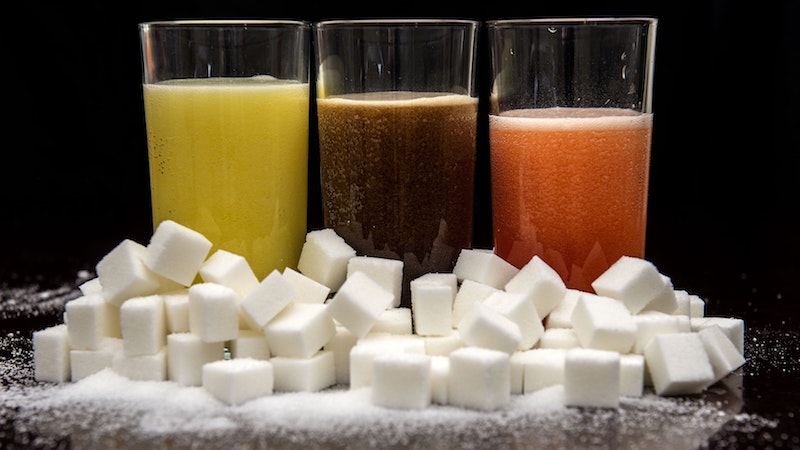 Drinking less than one can sugary drink or 100% fruit juice per day has been linked to an increased risk of cancer, research suggests.

Experts reported that people consuming just under 200ml on average of a sugar-sweetened drink or fruit juice each day had an 18% increased risk of all types of cancer.

Among women, researchers found a 22% increased risk of breast cancer.

92.9ml - The amount of sugary drinks of 100% fruit juice on average people consumed a day

But they said their findings showed an association and could not prove that sugary drinks definitely caused cancer.

The study, published in the British Medical Journal (BMI), analysed data from 101,257 people who were aged 42 on average at the start of the study and were typically followed up for five years.

Their intake of more than 3,000 different food and drink items was assessed at the start of the study and every six months, with each person completing at least two 24-hour dietary questionnaires.

The result showed that, on average, people consumed 92.9ml per day of sugary drinks or 100% fruit juice, which contains naturally-occurring sugar.

For every extra 100ml per day consumed on top of this, a person's cancer risk increased by 18% for all cancers and, among women, by 22% for breast cancer.

Those people who drank the most sugary drinks, at 185.8ml per day on average, who then consumed an extra 100ml per day, had a 30% increased risk of all cancers.

Among women with the highest intake, the risk of breast cancer increased by 37%.

The researchers, from French Public Health Agency, and the Nutritional Epidemiology Research Team (EREN) in Bobigny, France, found that the link between sugary drinks and cancer held true even when a person's weight was taken into account.

Obesity is a known cause of 13 different types of cancer but the latest study found that even slim people were at increased risk if they drank sugary drinks or fruit juice.

The team said, "being overweight and weight gain might not be the only drivers of the association between sugary drinks and the risk of cancer".

They pointed to other research which suggested that sugary drinks promoted body fat around the abdomen, even if a person was a healthy weight, which in turn promoted the growth of tumours.

Other explanations for the link between sugary drinks and cancer could be the high glycaemic load of sugary drinks, they said.

The study found no link between diet drinks containing sweetener and an increased risk of cancer.

Dr Graham Wheeler, senior statistician at Cancer Research UK, said the study was large and well-designed but warned that the findings might not apply to a wider population.

He added: "Participants were followed on average for about five years, and 22 participants per 1,000 developed some form of cancer.

"So this means if 1,000 similar participants increased their daily sugary drink intake by 100ml, we'd expect the number of cancer cases to rise from 22 to 26 per 1,000 people over a five-year period.

"However, this assumes that there is a genuine casual link between sugary drink intake and developing cancer, and this still needs further research."

The study found that even when the group of sugary drinks was split into fruit juices and other sugary drinks, the consumption of both types of drinks was associated with a higher risk of overall cancer.

The researchers concluded: "These data support the relevance of existing nutritional recommendations to limit sugary drink consumption, including 100% fruit juice, as well as policy actions, such as taxation and marketing restrictions targeting sugary drinks, which might not potentially contribute to the reduction of cancer incidence."

Speaking on behalf of the British Fruit Juice Association, registered dietitian Helen Bond said: "The findings of this observational study completely contradict previous clinical trials on 100% fruit juice which makes me suspect that participants were not correctly reporting their consumption of 100% fruit juice."

Susannah Brown, acting head of research interpretation at the World Cancer Research Fund, said the charity's own research had shown a link between obesity and cancer.

She added: "More research is needed to understand if there is a direct link between sugary drinks and cancer.

"For now, we recommend not drinking sugary drinks to reduce your risk of weight gain and therefore cancer. Instead, rely on water to quench your thirst."

Gavin Partington, director-general of the British Soft Drinks Association, said the study "does not provide evidence of cause, as the authors readily admit".

He added: "Soft drinks are safe to consume as part of a balanced diet.

"The soft drinks industry recognises it has a role to play in helping to tackle obesity which is why we have led the way in calorie and sugar reduction."