The Northern Ireland Secretary has again insisted he has no authority to intervene and resolve the problems and has said Stormont must resume its power-sharing executive. 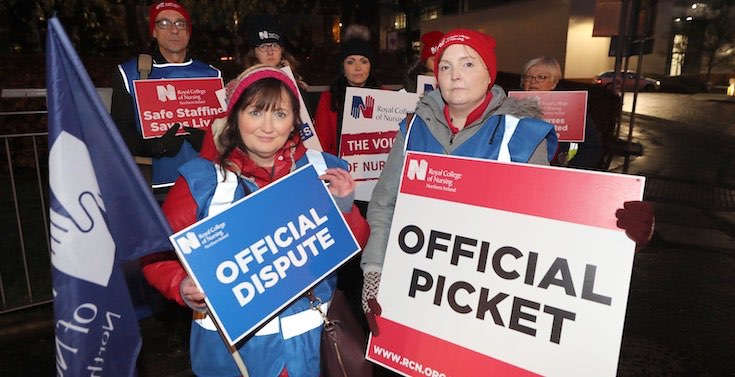 The Northern Ireland Secretary has told the region’s politicians it is up to them to fix the health crisis.

Julian Smith denied using the escalating situation as leverage to force the Stormont parties back into a power-sharing executive, insisting he does not have the power to intervene to provide solutions.

Mr Smith convened a stand-alone “health summit” with the five main parties at Stormont House in Belfast on Thursday morning as part of the wider talks process to restore devolution.

It was anticipated that he would use the encounter to urge them to make a series of commitments to tackle the crisis.

But Sinn Fein emerged from the meeting claiming Mr Smith did not mention any such pledges.

“It was disappointing that Julian Smith didn’t stay for the full meeting,” he said.

The summit comes a day after an unprecedented strike across the region – action which saw thousands of nurses take to picket lines for the first time ever in the UK.

Around 5,000 medical appointments were cancelled as a result of the strike which paralysed parts of the region’s already foundering health and social care sector.

Healthcare workers in Northern Ireland said they were left with no other option than to stage the walkout after years of under-staffing and sliding pay rates compared with England and Wales. 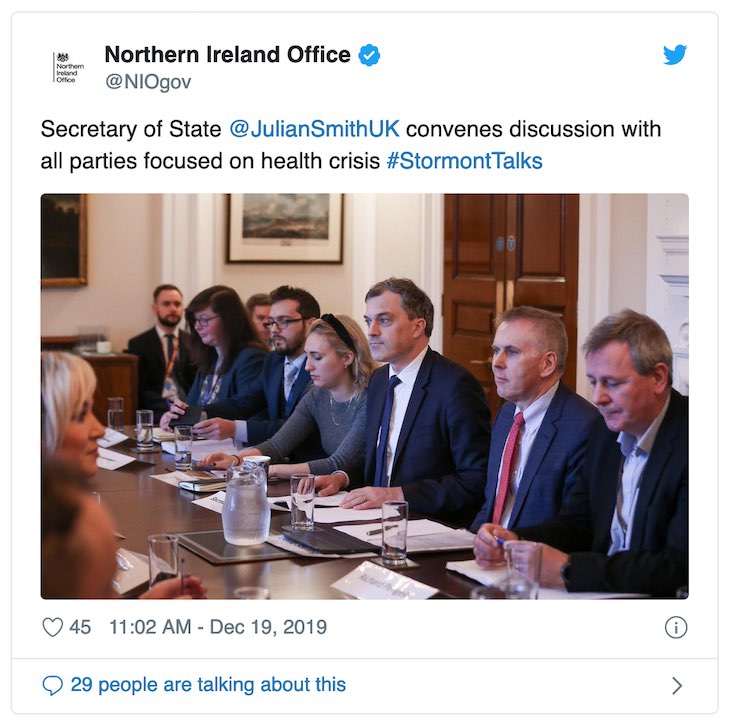 The health service crisis has emerged as the key political issue dominating the early stages of the new initiative to restore power-sharing.

Some of the local parties have accused the Secretary of State of using the issue as a stick to beat them into striking a deal to resurrect the institutions. They claim he could intervene if he wanted to, and act on the pay issue in the ongoing absence of power-sharing.

After the summit took place, Mr Smith reiterated his position that he does not have the power to make decisions on the region’s health service, making clear to the parties that it is their responsibility.

“I have explained previously that I don’t believe I have the power to intervene under the Good Friday Agreement, under that agreement that has provided stability to Northern Ireland, over the past decades,” he said.

“Health was established as a devolved matter.

“And we’re prioritising health today in terms of the talks process. And I really, really hope that, if we can get the devolved institutions back up and running, that is the most sustainable way to getting pay parity for the trade unions and for the workers that have been going on strike.”

On the list of commitments Mr Smith is hoping the parties will commit to, Mr Sheehan said: “There was no mention of pledges.

“There was no discussion around any pledges, and we made it clear to Julian Smith while he was in the room that the health workers shouldn’t be used for political leverage in these political negotiations and if the Executive isn’t sorted out, and even while we are waiting for that to happen, that he and the Civil Service have the power to implement pay parity and to increase nurse training places to ensure there is safe staffing levels on our wards.”

Mr Smith said he did not want to get into a “blame game” with local politicians over the health issue.

“But what I know is I do not have the power to direct the Northern Ireland Civil Service,” he added.

“I’ve been working hard behind the scenes to try to see what money might be available to try to see how we can move this dispute on, and my conclusion is, the best way I can help is to get a sustainable deal over a number of years that gives nurses and hospital workers what they want, and ensures that they have security, and the best way to do that is that the Executive gets up and running as soon as possible to ensure that those workers have stability over Christmas, but over the next two or three years as well.”

Ahead of Thursday morning’s summit, it emerged that Mr Smith was seeking to secure consensus among the parties on a series of commitments, namely:

– Commit to paying health workers the same as counterparts in the rest of the UK;

Mr Smith denied that asking the parties to agree a series of commitments would be evidence of the Government dictating policy to the devolved parties.

“I’m obviously going to be as activist as I can be in encouraging political leaders to deliver the commitments that I believe are needed,” he said.

“That is quite different from me telling the Northern Ireland Civil Service what to do, but I’m going to do everything I can to deliver for nurses, to deliver for hospital workers by using my influence with party leaders to ensure that they get back in an Executive and that they deliver for people on the front line.”

Mr Sheehan said “nothing had changed” as a result of the meeting.

He said it involved discussions with civil servants around the sums of money that would be required to fix the issues.

He said it was a clear that a “major investment” is required.

“There was consensus that there are major challenges to fix the health service,” he said.

Asked if the Government would offer financial support to help address the problems in health, Mr Smith said: “I’m expecting there will be a number of requests, financial requests, and I’m already in touch with the Treasury, and the key thing is that party leaders here agree to go back into the Executive.

“The UK Government stands ready to support that decision in any way we can.”

Mr Smith would not be drawn on whether there was any likelihood of a breakthrough in the talks to restore power-sharing before Christmas.

“These can be very difficult and long processes, we have had some very good engagement this week,” he said.

“The most important thing is that people trust each other, and that party leaders who have got different agendas come together in the interests of Northern Ireland. I believe there is a will to do something.

“But let’s see how long that takes. It’s important, above all, that we have a sustainable Stormont that can last over the next decades and it’s that that I want to ensure is delivered through these talks.”

Asked if the health crisis had created a greater onus on the parties to strike a power-sharing deal, Mr Sheehan stressed that it was vital to reach an agreement that is “credible and sustainable”.

“The great fear is if we don’t get that and the Assembly gets up and running without being sustainable and credible, if it collapses again it raises concerns that it might never get up again in the future,” he said.