Boris Johnson faced probing questions from nurses on a visit to the West Cornwall Hospital in Penzance as he kicked off a day of campaigning in the county. 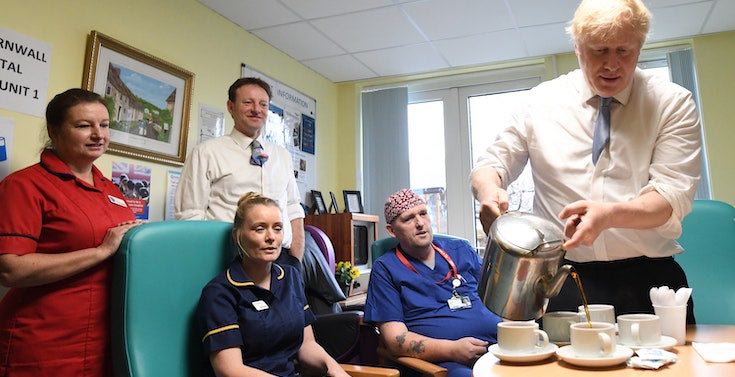 The Prime Minister met patients and nurses as he toured the wards but was challenged on his General Election campaign pledges as he drank tea with staff on a medical ward.

One student nurse told the PM how she was “struggling” financially because of tuition fees and asked him about his plans to bring back the nursing bursary.

Mr Johnson said: “We’re definitely bringing back the bursary … but I’ll have to check that (on tuition fees).”

Another asked him about his commitment to deliver 50,000 new nurses, saying: “Where are these people going to come from?” (Health Foundation Chief Executive said Conservatives will need half of the 50,000 nurses to come from overseas).

The PM replied: “I think we should have a programme of making sure that people who have grown up in this country have a career in nursing… we’ve also got to make sure that we are open to people from around the world, and we can do that and we’re going to have an immigration system that is points-based.”

Earlier on his tour of the ward, Mr Johnson told staff that his father Stanley was born in Penzance, but when asked where, he replied: “I presume he was born in a hospital … I’ll have to find out.”

One patient, Andrew Hall, urged the Prime Minister: “Get us out of Europe and watch out for John McDonnell … he’s a sneaky one.”

He later discussed Brexit and travel times to hospitals in Cornwall with another patient receiving dialysis.