Numbers of living and eligible organ donors fall in a year, report says

There were also fewer organs donated and transplants. 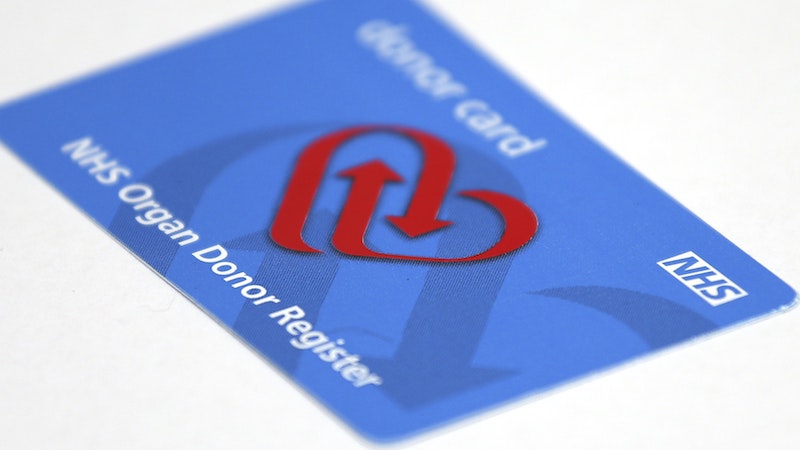 The number of living and eligible organ donors, organs donated and transplants all fell last year compared to the previous 12 months, officials have said.

The number of people who donated organs after they died reached a record high but the rise was the smallest for five years, according to NHS Blood and Transplant (NHSBT).

A total of 1,600 people donated organs after they died in the year ending March 2019, the highest figure on record. 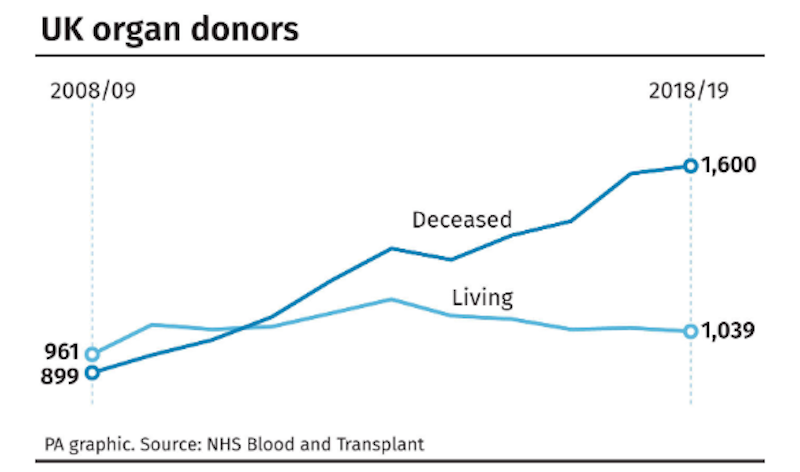 The 1.7% increase, of 26 donors, was achieved despite a 4% drop in the number of eligible donors, with 5,815 people dying in circumstances where donation was possible in 2018-19.

The number of living donors also dropped 3% to 1,039, a downward trend that has continued over the last six years.

The overall number of transplants fell by 2%, from 5,104 to 4,990, with a 1% increase in numbers of people on the transplant waiting list.

But they also warned that it will be "increasingly challenging" to maintain annual increases in donor numbers.

"Donors and their families give the most precious gift of life. We owe it to them, as well as those waiting for a transplant, to ensure their precious gift is honoured" - Anthony Clarkson, NHSB

Anthony Clarkson, director of Organ Donation and Transplant at NHSBT, said: "The reduction in the number of people dying in circumstances where they are able to donate, means that we need to continue to explore ways to improve the donation and transplant process.

"We are utilising new techniques and technologies to ensure that donated organs are in the very best possible condition for transplant and are working to increase awareness and understanding of organ donation and the law change across society with the aim that no opportunity for donation is missed.

"Donors and their families give the most precious gift of life. We owe it to them, as well as those waiting for a transplant, to ensure their precious gift is honoured and that we make the most of every opportunity to save and improve lives."

During 2018-2019, 408 patients died while on the transplant waiting list or within one year of being removed from it.

The total number of patients whose lives were potentially saved or improved by an organ transplant fell by 2% to 4,990.

There was no change in the number of kidney transplants, but pancreas, liver, heart, lung and heart-lung transplants all fell.

The report identified changing characteristics in donors who are becoming older, more obese and less likely to have died through trauma, all adversely impacting on transplant outcomes.

A spokeswoman for the British Transplantation Society, said: "As a community we are committed to increasing transplantation opportunities for every person in need of a transplant and we are continually developing and testing new technologies and techniques to further improve the organ donation and transplantation pathway, as well as continuing to highlight the need for more organ donors.

"This ongoing effort will allow us to make the best use of each precious organ and lead to the highest benefit for our patients."

In 2020, England and Scotland will introduce an opt-out system for organ donation, following the example of Wales in December 2015.

Experts hope that once the law change comes into force and public awareness increases, similar increases will be seen in England and Scotland.