Doctors have operated on wrong body parts and left surgical tools – including surgical gloves, chest drains and drill bits – inside patients. Hundreds of patients have suffered due to NHS blunders so serious they should never happen, new data shows. 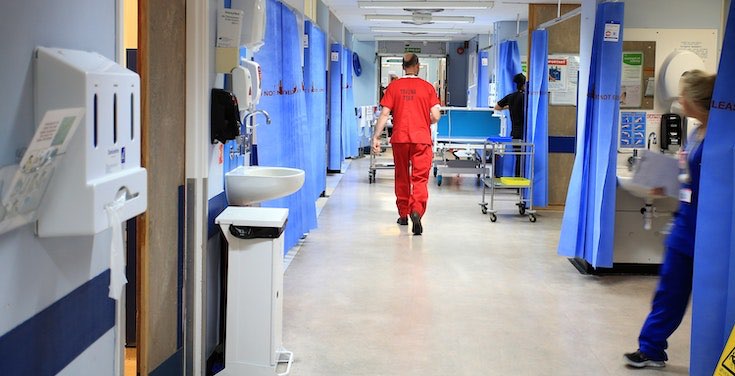 Hundreds of patients have been harmed by ‘never events’, data shows

Some 629 “never events” occurred in NHS hospitals between April 2018 and July this year – the equivalent of nine patients every week, according to data obtained by PA news agency.

The figures show doctors have operated on the wrong body parts and left surgical tools (including surgical gloves, chest drains and drill bits) inside patients many times over.

Two men were mistakenly circumcised, while a woman had a lump removed from the wrong breast and two others had a biopsy taken from their cervix rather than their colon.

A further six women had ovaries removed in error during hysterectomies, plunging them into menopause. 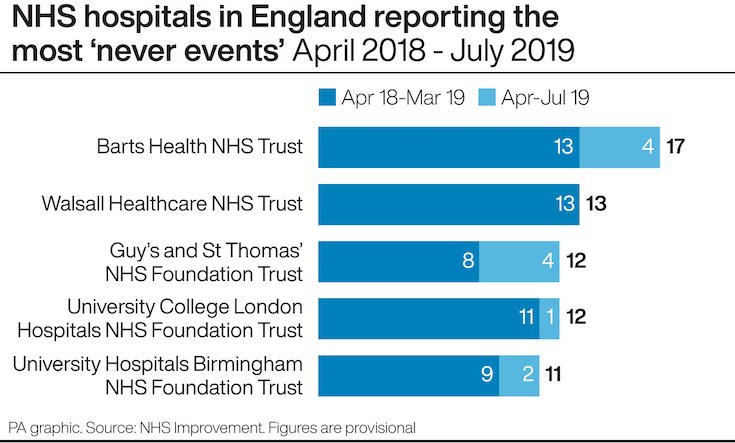 Some Trusts have higher rates of never events than others

Professor Derek Alderson, president of the Royal College of Surgeons, said such mistakes are “exceptionally traumatic for patients” while the Patients Association described them as “devastating”.

The figures revealed how several patients had procedures intended for someone else, including colonoscopies, lumbar punctures and laser eye surgery.

Other potentially fatal mistakes included patients being given ordinary air rather than pure oxygen, and people falling from poorly secured windows.

Some patients were given overdoses of drugs including insulin, while others had feeding tubes misplaced and put into their airways.

Medics also transfused the wrong type of blood to six patients, while 52 people had the wrong teeth taken out.

Overall, 270 incidents related to wrong site surgery, while 127 were “foreign objects” left inside people after operations, including specimen bags, needles and swabs.

The figures, which are provisional, showed that some NHS trusts have higher error rates than others.

Barts Health NHS Trust in London had the most errors, with 17 never events over the period, including eight cases of wrong site surgery.

Professor Derek Alderson, president of the Royal College of Surgeons, said: “While these cases are very rare, never should mean never.

“Never events are exceptionally traumatic for patients and their families.

“They can also be devastating for the surgeons and healthcare staff involved. “NHS staff are there to care for patients, so knowing you have caused harm is incredibly distressing.

“It is vital that all theatre staff use, and are involved in, the World Health Organisation pre- and post-operative checklist process, as these have been designed to help prevent serious incidents.

“It is also important that the NHS continues to promote a culture of openness and transparency, both in terms of publishing surgeons’ outcomes and the number of ‘never events’ that, sadly, occur.

“This will allow surgical teams to admit mistakes and learn from them, so that hopefully they do not happen again.”

Rachel Power, chief executive of the Patients Association, said: “Wrong site surgery incidents are preventable safety instances that can have devastating consequences for the patient and their family.

“People who suffer harm because of mistakes can suffer serious physical and psychological effects for the rest of their lives, and that should never happen to anyone who seeks treatment from the NHS.

“Each incident of this nature puts patients at avoidable risk of harm.

“Although the NHS is under significant pressure, these incidents should not occur if the available preventative measures are implemented.”

Staff struggle against time and space to follow guidance effectively

An NHS spokeswoman said: “The NHS cares for over half a billion patients a year and, while incidents like these are thankfully extremely rare, it is vital that when they do happen hospitals investigate, learn and act to minimise risks.

“The patient safety strategy published in July gives NHS staff even more support to do their job and includes a new education programme and a world leading incident reporting system to reduce the risks of human error.”

A report on errors from the Care Quality Commission (CQC) last December found that never events continue to happen “despite the hard work and efforts of frontline staff”.

It added: “Staff are struggling to cope with large volumes of safety guidance, they have little time and space to implement guidance effectively, and the systems and processes around them are not always supportive.

“Where staff are trying to implement guidance, they are often doing this on top of a demanding and busy role that makes it difficult to give the work the time it requires.”

The latest data cannot be compared with previous years due to changes in how never events are recorded.

• UK at bottom of league table for some key cancers