The proportion of cancer patients requiring radiotherapy is predicted to rise in the next decade as more emphasis is placed on early detection. 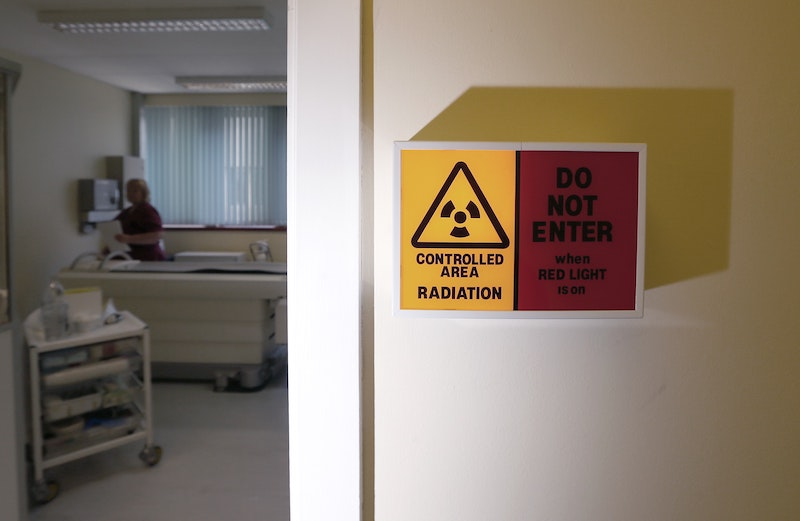 Around 5% of the NHS cancer budget goes towards radiotherapy

20,000 patients could be losing out each year

Politicians have criticised the “secret scandal” of poor radiotherapy provision amid a dispute with the NHS over how many cancer patients may not be getting treatment.

A report from MPs across the political spectrum estimates that 20,000 patients are missing out on treatment each year.

The report said it had observed “consensus” and “widespread acknowledgement” of the estimate, based on analysis from the charity Action Radiotherapy of Government data.

The figure was reached by subtracting the actual external beam radiotherapy use from the optimal use, excluding in private treatment, based on just under 50% of cancer patients needing radiotherapy at some point during their treatment.

But the NHS said the figure was based on outdated data and not reliable, adding that it was “completely wrong” to suggest that patients were missing out on treatment.

And Cancer Research UK (CRUK) and the Royal College of Radiologists (RCR) both said it was difficult to pinpoint the number of people who could be missing out.

The report acknowledged it was very difficult to accurately predict need due to regional variations in provision, but said it was “unacceptable” that the primary commissioning body had no clear estimate.

Patient choice is a factor

The report said: “There was consensus among practitioners that much of the shortfall could be attributed to access and travel time, which was found to have a direct and statistically significant impact on access.

“NHS England seemed reluctant to accept what seemed the consensus view of most other respondents and there was concern they were presenting evidence in a misleading way.”

Vice president of clinical oncology at the RCR, Dr Jeanette Dickson, said there were issues with the modelling used to work out how many people should receive radiotherapy and that patient choice was a key factor.

She said: “We recognise that the models are inaccurate, we recognise in the UK that there appears to be a difference between what is modelled and what is delivered, and the number of that we cannot be sure of, but 20,000 is not an unreasonable ballpark.

“It may be a lot smaller than that but it’s not a lot bigger than that, and we felt that there were people who, were access issues or other issues changed, may choose to access radiotherapy, but we did not necessarily believe that these people were being denied access.”

SABR unavailable in many NHS trusts

The report, titled Radiotherapy – Securing The Future Of Britain’s Secret Lifesaver, was produced by the All-Party Parliamentary Group on Radiotherapy.

It said NHS England had been unable to properly explain why advanced radiotherapy technique stereotactic ablative radiotherapy (SABR) was available in fewer than half of the NHS trusts which provide radiotherapy.

An NHS spokesman said: “It is completely wrong to suggest that patients are missing out on radiotherapy based on this data from 2015 which is not reliable and ignores the fact that since then, the NHS has invested £130 million in radiotherapy machines – the largest investment in this area for 15 years.

“Decisions about who receives the right treatment are difficult which is why they are made by clinical experts – the NHS does fund advanced radiotherapy for lung cancer in 25 specialist centres across the country for those patients where it is clinically appropriate.”

Rose Gray, policy manager at CRUK, said: “People in the UK may be missing out on radiotherapy but we don’t have good enough data to know why, or how many people this could be.

“Much more work is needed to understand this so that we make sure every person with cancer gets the best possible treatment.”

The report also criticised the “archaic system” that pays NHS trusts a sum per fraction of radiotherapy delivered, rather than per treatment course.

One NHS trust’s radiotherapy lead said they had been put in the “morally repugnant” position of choosing between patient care and financial solvency.

And workforce shortages of radiographers were seen as a major challenge, the report said, adding that some felt the situation would soon approach crisis level without action.

Around 5% of the NHS cancer budget goes towards radiotherapy, which kills tumours with high-energy radiation and is more likely to be prescribed the earlier cancer is diagnosed.

The proportion of cancer patients requiring the treatment is predicted to rise in the next decade as more emphasis is placed on early detection.

Urgent reform and significant increased investment is needed to match this future demand, the report said.