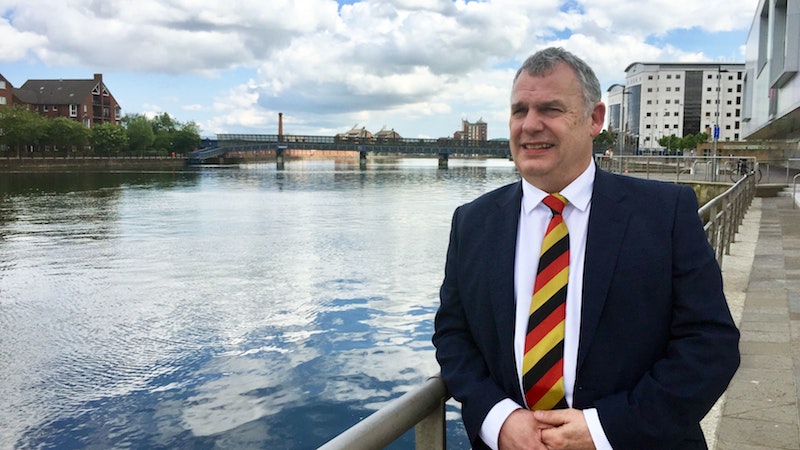 Speaking after giving evidence to the Infected Blood Inquiry, which is this week hearing evidence in Northern Ireland, Mr Kirkpatrick warned there could be many more “hidden” victims.

“This can’t happen again, there was more people infected in this inquiry and killed than probably in the Troubles of Northern Ireland, and it’s been hidden for so long and that’s shocking.

Around 3,500 people were killed in the 30-year sectarian conflict in Northern Ireland.

Earlier, father-of-two Mr Kirkpatrick, 53, who was born in Belfast but has lived Londonderry for 30 years, told the inquiry how difficult it had been to come forward.

"For me this is a major, major decision to tell your story in public" - Paul Kirkpatrick

“This is the first time I’ve told my story publicly and that’s been massive for me,” he said.

“For me this is a major, major decision to tell your story in public.”

The senior manager for a manufacturing company said he feared his children would be “mocked” for his decision to share his story in a public forum.

Mr Kirkpatrick told the inquiry he was treated with blood products for haemophilia as a young child in the mid-1970s.

He was informed in the 1980s that he had contracted hepatitis B and hepatitis C from contaminated products.

"We are continually exposed to major life-threatening events, continually. It's the whole of my life" - Paul Kirkpatrick

Mr Kirkpatrick said a doctor told him at the time that he would continue to be treated with potentially contaminated product, despite his confirmed infection.

He said the doctor’s rationale was that he was already infected, probably had been for a long time and had shown no real side-effects.

“We were continually being put at risk with product that was potentially contaminated,” he said.

Mr Kirkpatrick, whose blood was recently cleared of hepatitis C after treatment, spoke about the impact of the infection on his family and raising his twin boys.

“My blood was always open and my wife was following me around the house sterilising everything to make sure there was no risk to the kids,” he said.

“That was a real focus of our lives bringing up our children.”

Mr Kirkpatrick described the impact of the infection on his life.

He said he lives with the fear that his liver has been damaged and he would develop cancer.

“We are continually exposed to major life-threatening events, continually. It’s the whole of my life.

“It messes with your head, all these things mess with your head. We are trying to lead a normal life, but when you talk to people you realise it’s not normal, but for us it’s normal.”

The second witness to give evidence was Brigid Campbell, whose haemophiliac father Malachy Devlin died in 1990 having been infected with HIV in 1983 from contaminated product.

"It was all very swept under the carpet. To this day I don't know who was told, who knows what my dad died of" - Brigid Campbell

Mrs Campbell told the inquiry her mother struggled after the death of her father.

“It was the burden of the secrecy of it all, the stigma that was attached to it,” she said.

“It was all very swept under the carpet. To this day I don’t know who was told, who knows what my dad died of.”

She recalled the ordeal of her father’s funeral, revealing that special precautions had to be taken.

She said his body was delivered to the undertaker in a “disaster bag” and the family were only allowed to have his coffin opened at his wake for one night, and under strict conditions.

“His hands were covered and there was a net across his face which was obviously very different from any wake that I had been to,” she said.

She said it had been “extremely difficult” sharing her family’s story in public.

“My dad’s death was preventable and we owe it to him today and my mother and my family to ensure that his life counts,” said Mrs Campbell.

The final witness on the first day of the Northern Ireland hearings told the inquiry that contracting hepatitis C from contaminated blood saw her lose a successful career and led to the break-up of her first marriage.

"You could see them looking at you and saying 'is that not the same as Aids?' and you were having to explain yourself every time" - Ms E

She was told she contracted hepatitis C from being given a blood product as a teenager before 1987.

She claimed she only learned that she had the disease from a chance encounter with a doctor in a hospital ward six years later when she was being treated for chronic fatigue syndrome, also known as ME.

Ms E said she had told the doctor she had been feeling very unwell.

“She replied that ‘it’s not your ME, it must be the hepatitis C’, and this was the first I had ever had knowledge that I had hepatitis C,” she said.

The inquiry was told the doctor had no recollection of the conversation recounted by Ms E.

Ms E also recalled being told by a doctor in the 1990s that she would not live to see her 30th birthday.

“I got my then-husband to go out and purchase a camcorder so I could make video for my son so whenever he was older he knew who I was,” she said.

Ms E told the inquiry her health had deteriorated over the years. As well as chronic fatigue syndrome, she said she developed chronic fibromyalgia and has suffered from arthritis and serious gynaecological problems.

While she was later told her hepatitis C had cleared and the Von Willebrand disease had also faded, her general health had not improved, she told the panel.

Ms E spoke of the “stigma” she has endured.

She recalled when she gave birth to her first child she was kept in a separate room from the other pregnant women, with a yellow hazard sign on the door.

She also said she was always treated last when she visited the dentist, again in a separate room.

“When I was diagnosed I was 21 and just newly married and thought I had a whole life ahead of me,” she said.

“I had a fantastic job with great prospects, very well paid, I really enjoyed doing it and I was just basically looking forward to a fantastic life.

“To have that life taken away from you for no reason whatsoever, and especially no fault of your own, it’s very daunting, and having to live with something you didn’t cause and be treated like it was your fault and have people look at you like you are something out of the Jungle Book.”

Ms E said she stopped telling people she had hepatitis C from the late 1990s.

“You could see people looking at you when you said you had hepatitis C,” she said.

“You could see them looking at you and saying ‘is that not the same as Aids?’ and you were having to explain yourself every time.”

“I feel we are small over here and we are sometimes not taken into account with the rest of the UK,” she said.

Sir Brian thanked all the witnesses who had given evidence, praising their “courage”.

The inquiry will continue to sit in Belfast for the rest of the week.