Jeremy Corbyn has called on Boris Johnson to demand that Donald Trump takes the NHS “off the table” in trade talks ahead of the US president’s UK visit. 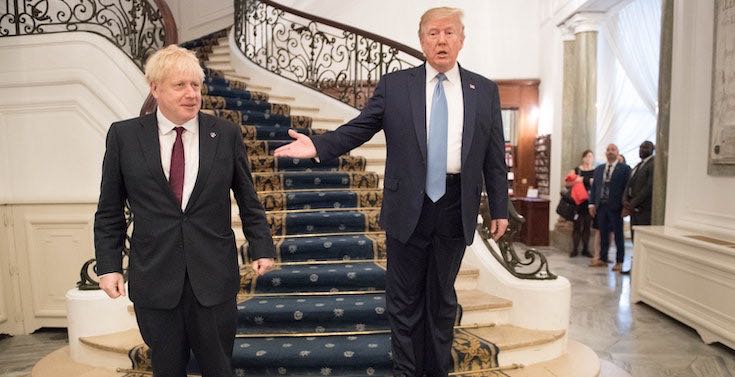 The Labour Party leader wrote to the Prime Minister on Monday calling for him discontinue discussions until Mr Trump rules out US companies gaining any access to public services in a post-Brexit deal.

Mr Trump will touch down in the UK on Monday ahead of a two-day summit of Nato leaders.

His presence has the potential to throw a political hand grenade into the campaign for the December 12 election, particularly if he gives any further backing to the PM, or speaks about Brexit.

Mr Corbyn wrote to the PM accusing him of having “misled the public” by claiming the NHS is not part of trade discussions.

Labour believes deal could drive up cost of NHS drugs

The Labour leader demanded that the UK-US talks must cease until Mr Trump amends negotiating objectives to exclude pharmaceuticals, and accepts the role of the National Institute for Health and Care Excellence in setting cost-effectiveness of NHS drugs. 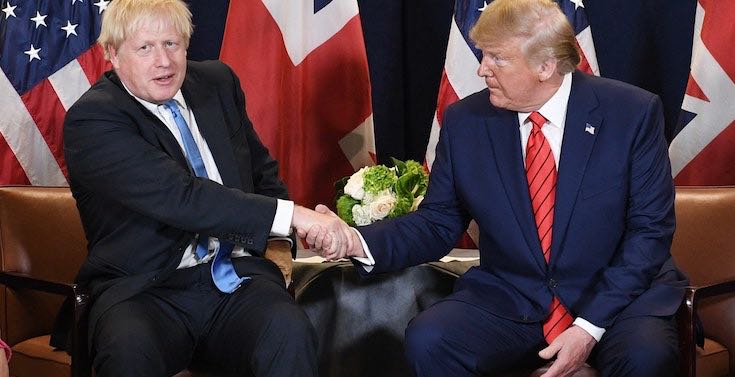 Corybn would like President Trump to make specific negotiating objectives

And he demands the president must “explicitly rule out” US companies winning access to UK public services through investor-state dispute settlement mechanisms, beyond the reach of British courts.

Labour believes a trade deal under Mr Johnson threatens to drive up the cost at which the NHS buys drugs, potentially draining £500 million a week from the health service.

Mr Corbyn concluded: “The public need to know that all aspects of our health service are genuinely off the table in any UK-US trade talks, and that no part of the NHS or our health system will be up for sale.”

Tory officials are wary that the president, who previously backed Mr Johnson as “the exact right guy for the times”, could dent the lead that the polls suggest the Conservatives have.

But a senior official in the Trump administration told reporters on Friday that the president “is absolutely cognisant of not, again, wading into other country’s elections”.

Mr Trump first sparked fears over his nation’s interest in the health service when he said “everything will be on the table” – including the NHS.

But he later performed a u-turn amid a public outcry, to say that he does not see it as being “part of trade”.

Jeremy Corbyn welcomed US President Donald Trump to Britain with a letter demanding he will not try to push medicine prices up through a post-Brexit trade deal.

To mark Mr Trump’s arrival in London for the start of the Nato summit, Mr Corbyn has written to him asking for reassurances that his administration will not try to include selling higher-priced US drugs to the NHS on its trade wish list.

Last week, the Labour Party leader called a press conference at which he brandished an unredacted report that gave details of meetings between US and UK officials, where they discussed the stipulations of a free trade deal between the two nations after Britain leaves the European Union. 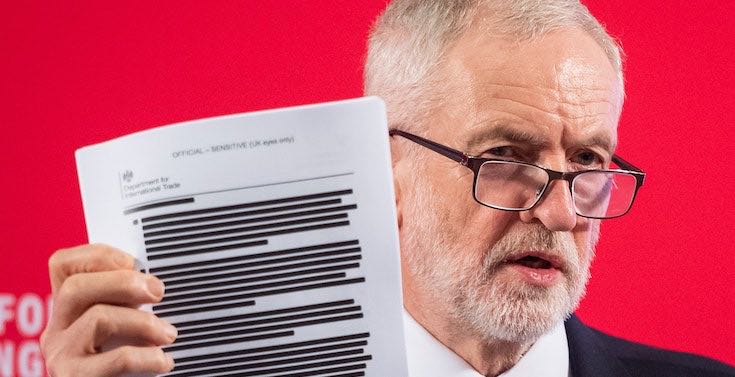 The document included confirmation of a round of meetings “dedicated solely to patents and pharmaceuticals”, where officials explained how drugs were approved for use on the NHS and described a US request for “total market access” to UK public services – a form of privatisation – as a “baseline” for an agreement.

In his letter, Mr Corbyn told the president he wanted “assurances” over the “prices paid to US drugs companies as a consequence of any such UK trade deal with the US”.

Labour has warned throughout the election campaign that allowing US medical companies to supply drugs to the NHS would push up the price of medicines.

Mr Corbyn told journalists at a rally in Hastings that a Labour administration would walk away from talks if the US insisted on elements of the NHS being up for grabs.

“We cannot allow our National Health Service to be put up for sale to American pharmaceutical companies,” he said.

Writing to Mr Trump, he stated: “As you will know, the potential impact of any future UK-US trade agreement on our National Health Service and other vital public services is of profound concern to the British public.

“A critical issue in this context is the cost of drugs to our NHS.

“Any increase in the NHS drugs bill would be an unacceptable outcome of US-UK trade negotiations.

“Yet you have given a number of clear and worrying indications that this is exactly what you hope to achieve.”

He told Mr Trump it would “go a long way to reassuring the British public” if he rowed back from the NHS-related negotiation aims seen in the leaked civil service paper on the UK-US talks.

“A revision of the US negotiating objectives along these lines would go a long way to reassuring the British public that the US government will not be seeking total market access to the UK public services – that the NHS will not be on the table in US-UK trade negotiations, that a US-UK trade deal will not open up NHS services to irreversible privatisation, and that the US government accepts that our NHS is not for sale in any form.”

Donald Trump, meanwhile, has insisted this morning that America wants “nothing to do with” the NHS amid claims that the health service could be used as a bargaining chip in post-Brexit trade talks. 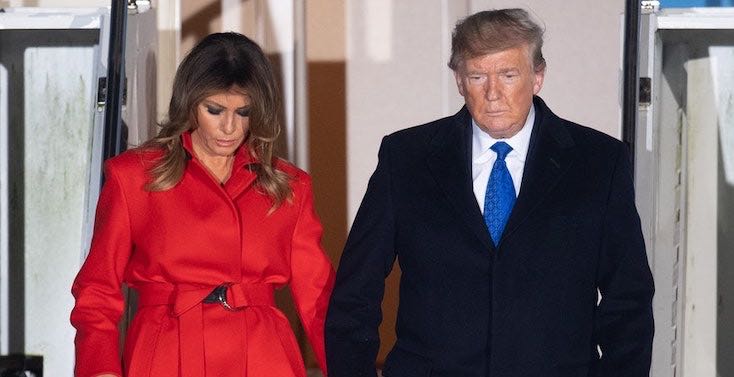 The US president, speaking in London at the start of the Nato summit, claimed he would “stay out” of the General Election campaign because he does not want to “complicate it”.

But Mr Trump went on to describe Boris Johnson as “very capable” and said he would be meeting the Prime Minister during the course of his visit to the UK.

In a breakfast meeting with Nato Secretary General Jens Stoltenberg at the US ambassador’s residence in London, Mr Trump was asked if the NHS should be on the table in trade talks.

He replied: “No, not at all, I have nothing to do with it. Never even thought about it, honestly.”