The new advert features a cigarette packet bearing the slogan ‘obesity is a cause of cancer too’. 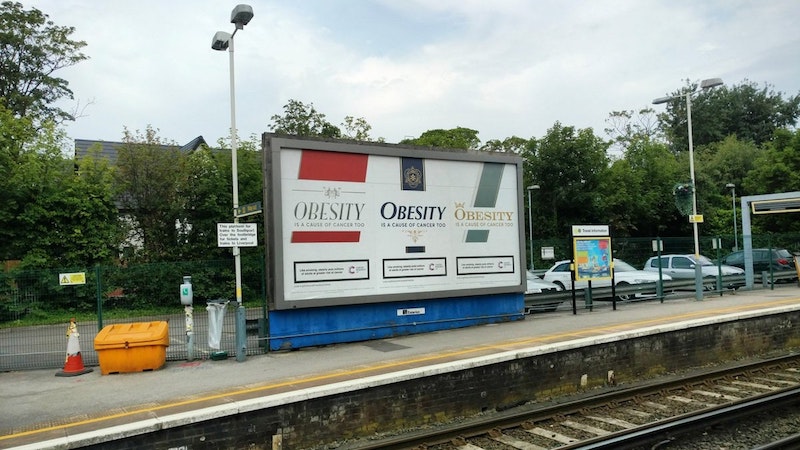 Cancer Research UK has been criticised for a campaign which draws a parallel between smoking and obesity.

A year after being accused of fat shaming for a series of adverts highlighting the link between obesity and cancer, the charity’s latest billboard features a cigarette packet bearing the slogan “obesity is a cause of cancer too”.

It adds: “Like smoking, obesity puts millions of adults at greater risk of cancer.” The advert has drawn criticism from social media users and mental health professionals. 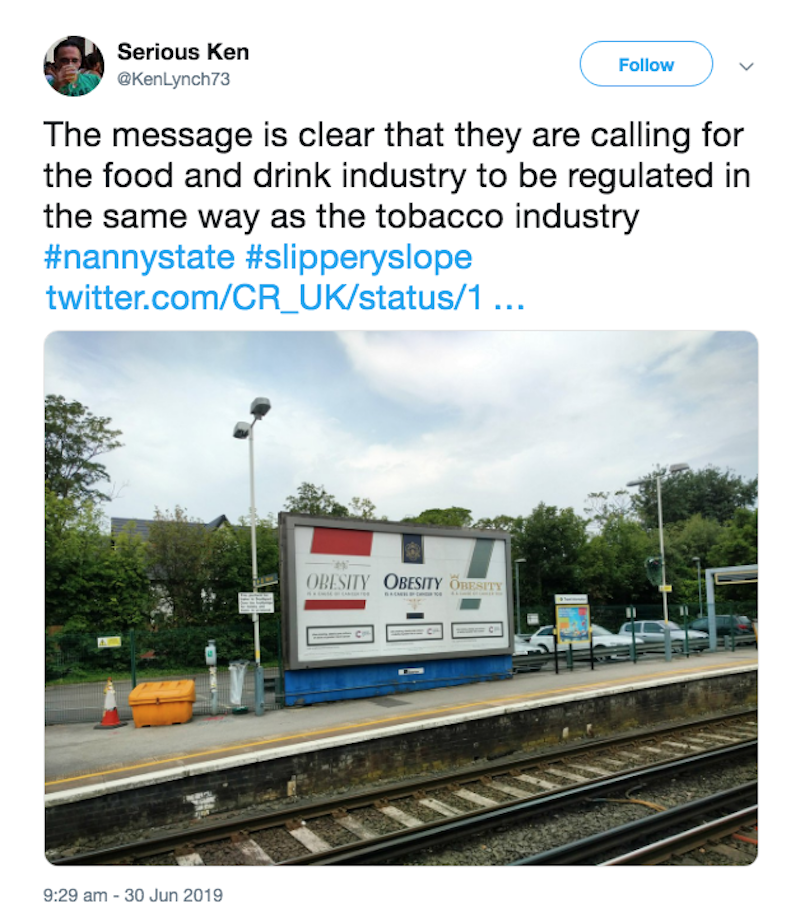 Simone Harding, a counsellor and nutritionist, told PA: “CRUK’s last billboard campaign ‘obesity is a cause of cancer’ in 2018 was heavily criticised by leading academics and obesity organisations as being stigmatising to people in larger bodies.

“Weight stigma is rife across society – the research detailing weight stigma in healthcare, media etc shows us that blaming individuals for a situation that is complex leads to worse outcomes, not better. It creates a bigger problem.”

He told PA: “I don’t like it. I understand that Cancer Research UK want to say there is an increased risk of cancer if you are obese, but to link it visually with smoking is crass.

“It is insensitive to people who are overweight and are trying hard to do something about it. Obesity is not the same as smoking and it is a mistake to link the two.” 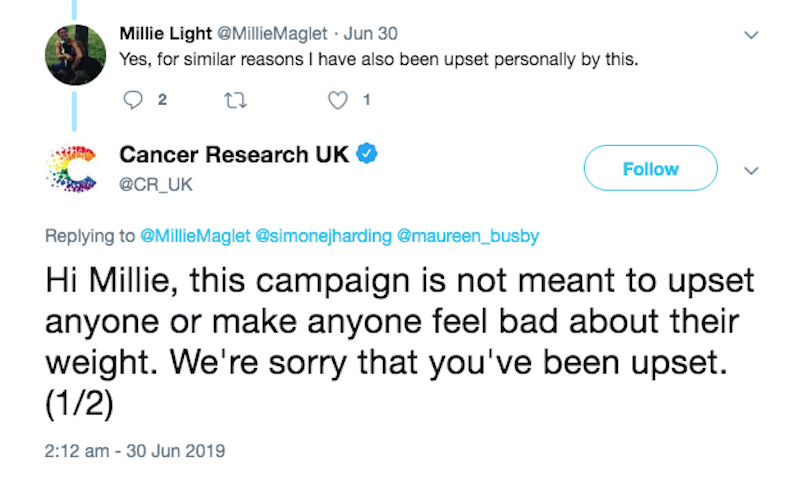 Cancer Research apologising for the offence caused by this campaign.

However, the charity said the campaign was not aimed solely at people who are obese, but targeted at the decision makers in parliament.

Cancer Research UK chief executive Michelle Mitchell said: “Our campaign aims to raise awareness of the link between obesity and cancer, and to inspire policies that create a healthier environment. We have a responsibility to tell people about what might increase the risk of cancer.”

She added: “Like smoking, obesity puts millions of adults at greater risk of cancer – and like smoking rates, obesity rates can be reduced with government-led change. Smoking rates in the UK have dropped dramatically over the years, thanks to measures like higher tobacco taxes and marketing bans; now we need a similar approach to tackle obesity.”

Last February, comedian and body positive campaigner Sofie Hagen criticised an advert from the charity that highlighted obesity as the leading preventable cause of cancer after smoking, calling it “incredibly damaging”. 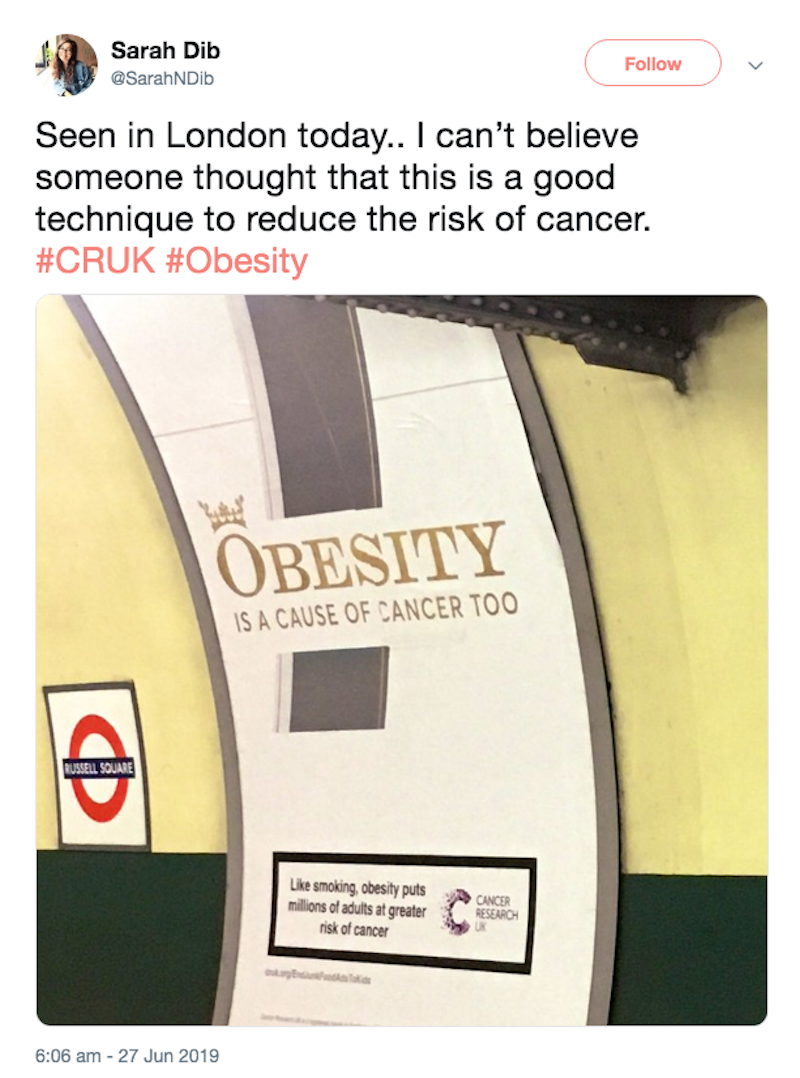 She wrote at the time: “Society viewing fatness as a negative thing is a thing that kills more than the cancer that you MIGHT get due to MAYBE something to do with you POSSIBLY weighing MORE than a CERTAIN weight POSSIBLY MAYBE.”

While obesity is linked to an increased risk of a variety of different cancers, the exact reasons why are not yet fully understood. Critics of the latest Cancer Research campaign said equating smoking and obesity was not a fair comparison. 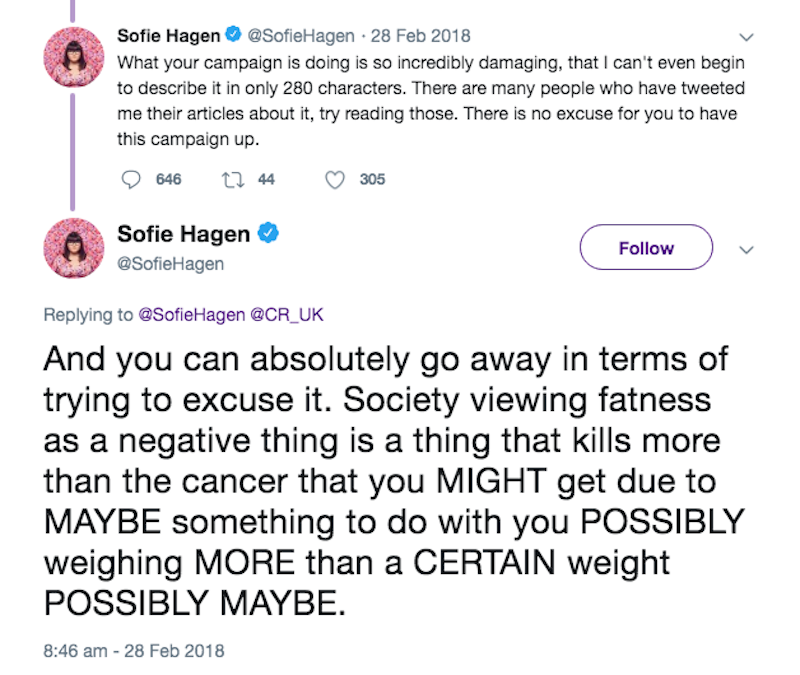 Fiona Quigly, who is researching weight-related communication in healthcare, said on Twitter: “Smoking is not given by genetics, your body doesn’t adapt to force you to smoke more, you don’t get discriminated against because you smoke, you don’t have to pay for the privilege of giving up smoking.”

Ms Harding said that “the biggest risk of being classified as obese is poverty – and that is not down to personal choice or individual responsibility”.

She added that the campaign risks minimising the experiences of large amounts of people who have cancer.

She said: “My husband has recently been diagnosed with lung cancer at 43. He is thin and a non-smoker. Neither of those variables protected him and the advert really renders his experience as a person with cancer invisible.

“Cancer is never anyone’s fault. No one wants cancer, and despite being fat or being a smoker, everyone deserves compassion.”