Cancer patients take part in a photoshoot for Defiance campaign

Sixteen men and women who have been diagnosed with cancer have taken part in the ‘Defiance’ project, to show strength against the disease. 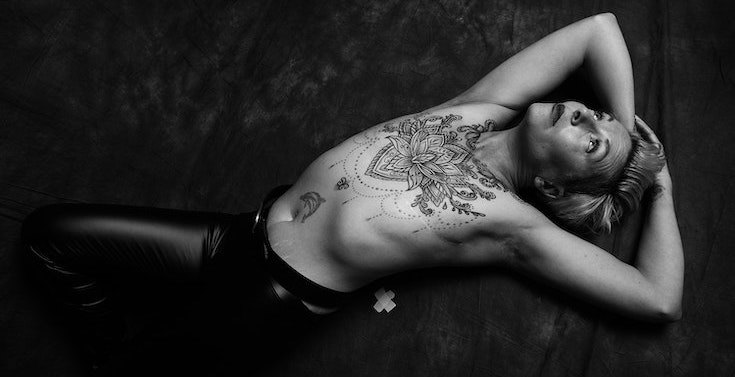 Samantha, one of 16 men and women who have bared their scars

An honest look at cancer

The scars of cancer patients will be put on display as part of a new project showing the “gritty and raw reality” of the disease.

Sixteen men and women who have been diagnosed with cancer have taken part in the “Defiance” photoshoot to show strength and solidarity against the disease, despite the changes to their bodies.

The “Defiance” project photos have been released as part of Stand Up To Cancer, a joint fundraising campaign from Cancer Research UK and Channel 4, which aims to look at cancer in an honest and unfiltered way.

Photographer Ami Barwell, who shot the images, said that the project was an “act of rebellion”.

She said: “Cancer isn’t pretty, it can be dark, painful and destructive. But we aren’t playing to cancer’s rules. These people are strong, beautiful and, most of all, defiant.”

“Defiance” follows on from Barwell’s 2017 “Mastectomy” series, for which she received an overwhelming positive response.

She said: “My previous Mastectomy series was inspired by my mum, who has had breast cancer twice, and a mastectomy, so this was a subject very close to my heart.

“I wanted to raise as much awareness for breast cancer as possible, showing women baring their scars in a series of gritty and honest portraits. I received emails from women worldwide explaining how my photographs had inspired them and given them strength.

“For many, these were the first photographs they’d seen showing women post-mastectomy as beautiful, sexy, strong and amazing. I knew I had to carry on raising awareness with Stand Up To Cancer and empowering people through my photographs.”

Barwell decided to shoot a broader series to reflect a more diverse range of experiences with cancer. 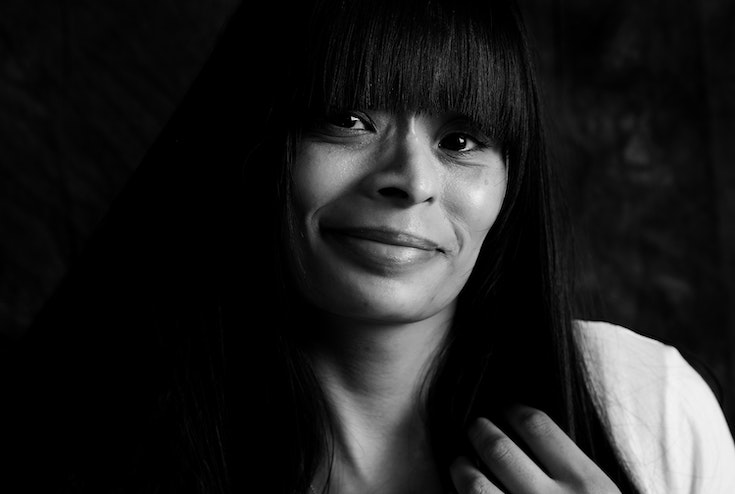 Tasha Jilka, 27, from Leicester, who was diagnosed with neuroblastoma just before her 18th birthday

Among those featured in “Defiance” is Tasha Jilka, 27, from Leicester, who was diagnosed with neuroblastoma just before her 18th birthday in 2010 and says it “massively impacted” her confidence.

“My cancer has completely changed my face, so it’s not something I can hide away from,” she said.

“I’ve had to build a thick skin over the past nine years and now I use my face as a symbol of strength, something that shows everything I’ve been through. I’m standing up to cancer by embracing my new normal every day.” 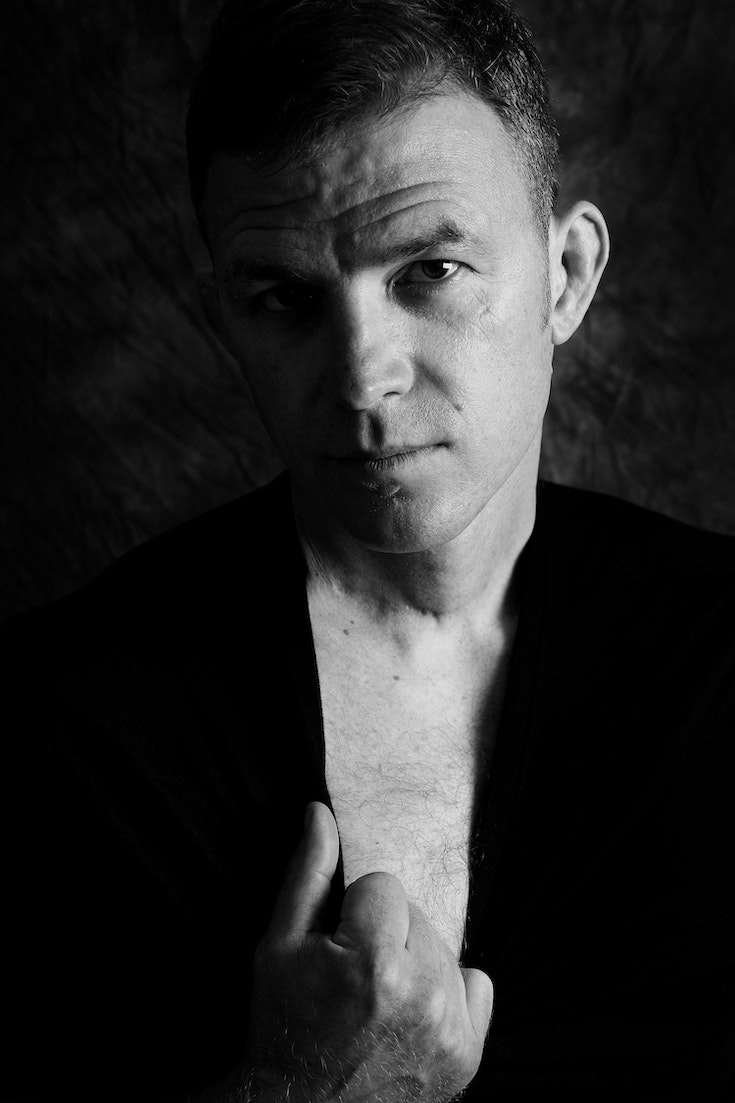 Mark Douglas, from London, has thyroid cancer and received a scar on his neck during surgery

Mark Douglas, 39, from London, is living with thyroid cancer and displays the scar on his neck that he received through surgery in the series.

He said: “I was diagnosed with cancer when I was 30 and the psychological impact it had on me and my family was huge. I have a scar on my neck from surgery, but the main physical change for me has been how it’s altered my voice, which is almost like an invisible scar.

“I was thrilled to be a part of this project for Stand Up To Cancer, because this disease comes in all shapes and sizes and I want to show others that we can all be defiant in our own way.”

Deborah James, 38, also from London, has bowel cancer and is known on social media as “Bowel Babe”.

“I’m living with stage four cancer, but you wouldn’t know it if you saw me walking down the street,” she said.

“For me, it’s about not being defined by my cancer. I want to be seen as the woman I was before and yes, sometimes I do still want to look sexy.

Doing this shoot for Stand Up To Cancer has been so empowering.

“My scars have affected my confidence at times, but I’ve learnt to appreciate my body for what it is – strong and resilient.”

The “Defiance” project does still feature several people who have undergone mastectomies, though this is not limited to women. 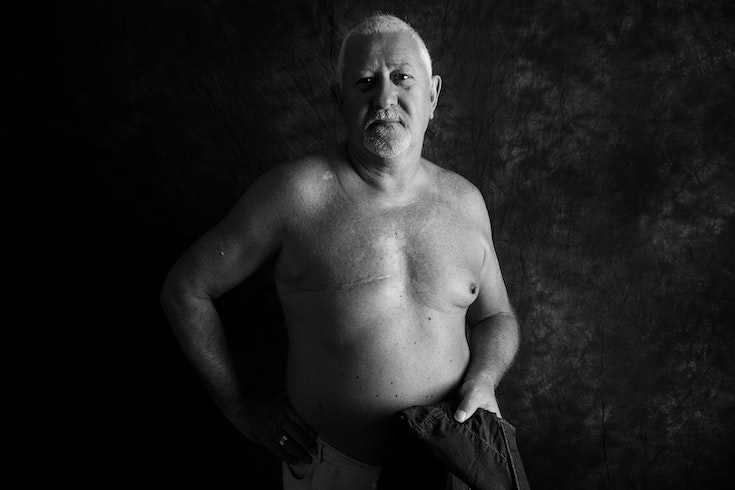 Steve McAllister, 67, from Cardiff says he has ” completely embraced” his scar

“Before my mastectomy I was quite concerned with what my scar was going to look like, because I’d looked online and hadn’t seen any positive images. Now though, I don’t worry about it.

“I’ve completely embraced my scar, it’s as much a part of my body as my arm or my leg. Stand Up To Cancer is all about showing cancer who’s boss and I really channelled that when taking part in this shoot.”

She said: “A lot of women get breast cancer and a lot of those now survive it. Those survivors often live very comfortably with their new body image. But the public impression of this illness and what it does to your body hasn’t caught up with this.

“The first mastectomy scar I ever saw was my own, and that kind of secrecy and mystique just adds to the perception of fear. I am extremely proud of my scar. It is a story of survival of an unexpected diagnosis and some pretty unpleasant treatment and is an important part of who I am.”

Simon Harrison - from Stand Up To Cancer

Simon Harrison, head of Stand Up To Cancer, said: “We’re thrilled to be working in collaboration with Ami again.

“The images she’s taken are so powerful and really move you to challenge what it means to have been treated for cancer. The strength and defiance these men and women have shown is incredible and truly encapsulates what Stand Up To Cancer is all about.

“We hope that by seeing these images, the public will be inspired to get involved in any way they can and help us beat cancer at its own game.”

Stand Up To Cancer funds cancer research and to date has raised more than £62 million to support 52 clinical trials and projects.